Under the ominous shadow of a police helicopter (there go our taxes!) the silent demo in protest for the murder of Iñigo Cabacas transited today the streets of this city. The colors of the local football team, the popular Athletic Club, were the dominant ones, as most people dressed dark colors in duel.

The march culminated near the stadium. In the following match, the hymn of the team has not been played and 9 minutes of silence have been held at the beginning of the competition, culminating in a massive applause. The first goal was dedicated to Iñigo by its author, Fernando Llorente, gathering another massive applause.

The supporters associations Herri Norte and Abertzale Sur have placed large Basque flags with black ribbon in their localities (just behind each of the goals) and have left the stadium afterwards. 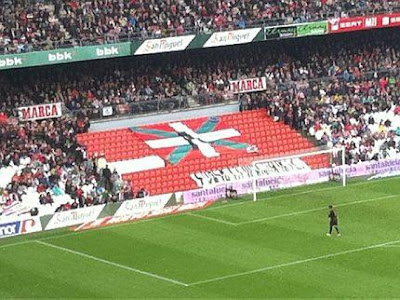 Source: Gara[es], Kirruli Kultur Elkartea[eu/es], Sare Antifaxista[es] (link 1, link 2).
There has been also many other local demonstrations in the Basque Country and elsewhere (international solidarity has been outstanding as far as I can tell) which I have not mentioned.


Update (Apr 16): Madriz Rebelde publishes today a letter[es] by Athletic player Koikili, denouncing the lack of transparency in the investigation and how the media have acted as rabid dogs of propaganda and lies, trying to criminalize the victim and change the facts.
Posted by Maju at 7:10 PM