Peasants under attack in Honduras: at least one murdered 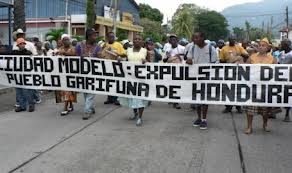 The brutal greed of Miguel Facussé is again pushing peasants to their deaths as they attempt to get what the law concedes them.

In the district of the Bajo Aguán one cooperativist farmer, José Braulio Díaz López, was murdered by security guards of Facussé. Then police decomissed important documents for the legal transference of lands he carried with himself - but arrested nobody of the murderers.

In the Caribbean coast, at Vallecito, hundreds of Garifunas (an Afrodescendant and Native American community) have been for days under the very real threat of gunfire over their heads and even invasion of paramilitary units inside their village.

This area near Trujillo, eyed by the US "Libertarian" mafias for their dystopic project of "model cities" are de facto under the undisputed control of drug-trafficking mafias, which I can only imagine are best friends of Peter Thiel, Patri Friedman and Paul Romer.

Of course, not only these pirates are implicated, also the bloody hand of Facussé appears again in Garifuna territory. The cacique took over Punta Farallones in 1997, land that belongs to the Garifuna community of Limón (confirmed even by the Supreme Court).

These abuses are only possible because the dictatorship, the Honduran state, does not offer even minimal protection to its citizens (de facto acting in defense of the mafiosi).