A few weeks ago, a famous political satire program in German TV, dedicated this song to the Turkish dictator Erdogan:


No big deal, right? The same humorist, Jan Böhmermann, has made similar satirical songs on many other political figures, German or otherwise, for example Donald Trump or Yanis Varoufakis (which I liked so much I mirrored in this blog).

Well, the issue has gotten out of control. The Turkish dictator demanded Böhmerman, using a forgotten legal backdoor, section 103, that forbids criticism of foreign leaders. In order to reach the courts, the demand had to be approved by Chancelor Merkel. She signed it, just like she signed, along with all other EU leaders, giving Turkey millions of euros, which will go to the DAESH or to corruption or both, after Erdogan used masses of Syrian and Afghan refugees as a blackmail tool in a well-known development that has been at the forefront of the European and global news in the last months.

The conflict has not stopped there. Yesterday, Pirate Party's regional leader Bruno Krahm was placed under incommunicado arrest after daring to read the lyrics of the song in a public demonstration for freedom of speech at Berlin, which marched behind a banner that read: "No power for Erdogan, freedom against Erdogan".

It has also been known that the Turkish embassy in the Netherlands is pressing Turkish expatriates to report any online comments against Erdogan or his authoritarian Islamo-Fascist regime.

I am pretty sure however that this story will end with the head of Merkel and that of her beloved friend Erdogan served on a cheap platter for the delight of us all. One head at a time anyhow and Merkel's is no doubt going to be the first one, as she has chosen to protect with her robust body the much weaker one of her Turkish crony. We Europeans are not at all in the mood for fascism. Bye Angela, good riddance.
Posted by Maju at 4:09 PM No comments:

Good synthesis of the latest developments in the ongoing uprising in France:


From LINKS International Journal (a strongly recommended site).
Posted by Maju at 9:35 PM No comments:

The social uprising continues in France

As predicted last week, in spite of police repression and significant under-reporting by the bourgeois media, the 2016 Spring protests in France continue with much increased strength a week after they began.

The trigger is the "loi travail" (labor law), which seeks to cut down worker rights to nothingness and get rid of the 35 hour week conquest (also in effect in some other European countries like the Netherlands), taking as unlikely "model" the collapsed economy of Spain, where there are effectively no more labor rights to be scrapped and yet does not recover at all, with unemployment well over 20% (around 50% among young people) and nearly every single new job as precarious as walking over a tight rope. In other words: the consacration of the "precariate".

In such a situation, even if all this began with a symbolic 24 hr general strike, the right to strike is very diminished and the class struggle takes instead the form of street protests (often illegal because human rights are also under heavy institutional attack), square occupations and electoral politics when possible.

That's how happened in the very authoritarian scenarios of Western Sahara, Tunisia, Egypt, peninsular Arabia and Turkey, but also in the more "liberal" ones of Greece, Spain or the USA. And now also in France, several years later, with renewed vigor. These strong protests, regardless of their success, evidence that repression is useless or nearly so, unless they go the way of Saudi Arabia, i.e. the way of total fascism (and even then it is most unclear how much longer the Arab theocracy can go on without the unavoidable revolution).

Even if the revolt has been triggered by the labor law, the goal of the protest remains undefined and is clearly much wider, albeit imprecise. The attempt to impose permanent martial law with the pretext of the Islamist terror attacks, for example, has also caused such unease in the Hexagon that it actually failed. There is a very clear and very strong discontent with the falsehood of the "socialist" label in the French Socialist Party (PS), a party that Paul Lafargue, the first ever socialist MP of France, would fight against no doubt. Not in vain Lafargue, Marx' son-in-law, wrote The Right to Be Lazy, demanding a 20 hr week (on average) already a century ago, but also because he was strongly opposed to the reformist (now already markedly reactionary) tendency led by Jaurés.

I don't feel able to synthesize what exactly is going on in France right now, so I suggest that you check #NoitDebout in Twitter (at a rate of a new tweet every few seconds) or read dedicated media like Paris-Luttes (most is in French though). If you know of other resources (maybe one in English?), please let me know.

Although newer and triggered by the Panama Papers, so maybe not fully comparable, there are also important protests in Britain, demanding the resignation of the conservative Prime Minister David Cameron, after it was known he had an account in a tax haven until recently. Obviously it is not the only motivation: his policies are also hated by many Britons, who nevertheless in many cases did not want to vote "labor" because the party was perceived then (before Corbyn's election) as nearly the same thing, allowing the Tories to achieve a strong majority. In real terms the support for Cameron's government is anything but mainstream.

Both countries share a very poor representation problem, having old-fashioned single district electoral systems, which can hardly be considered "democratic" at all.

See: #ResignCameron hashtag in Twitter.
Posted by Maju at 1:15 AM No comments:

While protesters sang Moustakis' songs, police employed riot equipment (rubber bullets, tear gas) to disperse the crowds. They later pretended to the media that they only had to ask politely, what is not what the victims of the gendarmes say.

Organizers claim 1.2 million people have taken part in the protests, while police cuts down the number to 400,000.

With due caution, this looks pretty much like the squares movements of 2011 in Tunisia, Egypt, Greece and Spain, later extended to the USA even. Something to watch closely and aid all we can.
Posted by Maju at 1:17 PM No comments:

The People takes over the streets in France 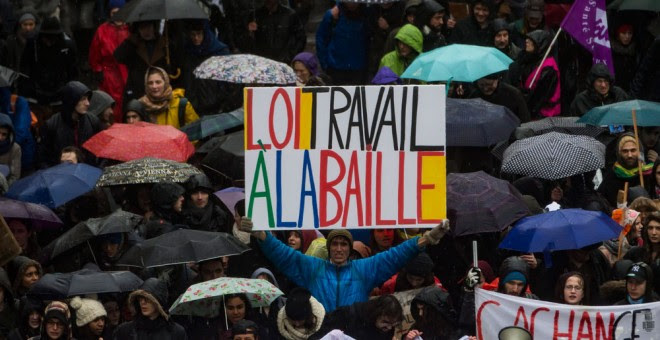 Many central squares and other public spaces were occupied tonight by peaceful but angry crowds demanding the total retrieval of the labor reform, that attacks the 35-hour week and promises to capitalists easier exploitation and Spain-style lay-off rules (i.e. no rules at all, resulting in massive unemployment and only precarious low-pay jobs, sometimes no pay at all even with the pretext of getting "experience").

The most affected cities in the "Standing Night" (initially called only for Paris) were Paris, Lyon, Caen, Bordeaux and Nantes. In Toulouse a theater was occupied instead. In most cases, the protesters were evicted by the military police (gendarmerie) but new protests are scheduled for today, beginning now (at 18:00 is the main call for Paris' Place de la Republique).

More than a million people took place in the protests yesterday, a 24 hr. general strike. Some opinion polls estimate that the support for the PS government (totally displaced to the far right in all kind of policies) is extremely low, with the Left Front (FdG) almost taking over the hegemony of the French left (although the most benefited are no doubt the right-wing parties). This should come as no surprise since Hollande disowned all his promises and placed a quasi-fascist, former interior minister Manuel Valls, at the helm of his cabinet, who is the main one pushing for far-right policies like the permanent state of emergency or the controversial labor reform that almost make Marine Le Pen look progressive in comparison (but do not get confused please: she's Mussolini with ovaries).

Is this protest the much awaited reactivation of the worker aspect of the class war in the heart of Europe? Clearly it is to some extent at least, although it is soon to say what effects will have. What is clear is that there is no exit to the crisis within Capitalism, hence sooner or later the socialist alternatives will take over, because there is no other possibility to get things straight. We only need a real non-manipulated, non-treacherous, real left, truly socialist, radical movement that is ready to set things straight. We also need to build it and keep it strong and healthy.