According to Reuters, Saudi Arabia has ordered its citizens to leave Lebanon "immediately", the state news agency reported in an SMS alert on Wednesday.

"The Saudi Arabian embassy in Lebanon calls all Saudi citizens to leave Lebanon immediately," the alert said, without elaborating.

Nothing else. But enough to get everybody worried, specially in Lebanon.

Ex-SKF comments that oil prices spiked after the advisory was known: 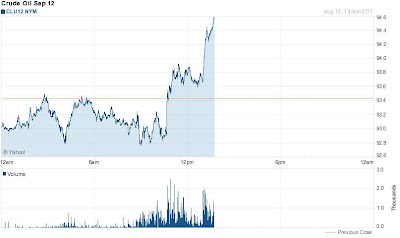 With due caution it may be simply caused by the growing spillover of the Syrian civil war into Lebanon, with some kidnappings going on.