The Parliament of Catalonia approved this afternoon the independence of Catalonia (full text of the declaration, in Catalan). The voting was secret and the results were as follows: 70 yes, 10 against and 2 blank votes and 52 absentees (hardcore Spanish nationalists who don't recognize the right of Catalonia to self-determination). There seems to be one missing vote in the account, nobody seems to care.

With this action Catalonia ends all procrastination in favor of negotiation, which has not been listened to by Spain at all. On the contrary, the Spanish government, which is weak electorally but, thanks to the many tricks of the Neo-Francoist constitution still has absolute majority in the Senate*, and has managed anyhow to muster the support of the so-called "Spanish Socialst Worker Party" to approve also today the suspension of Catalan autonomy, activating article 155 or the Spanish Constitution, the kind of constitutional provision that Hitler was fond of resorting to in order to consolidate his power some 70 years ago.

Today a conflict between two sovereign states begins: one enjoys international recognition and has 95.000 police agents (plus the military, which won't surely be used because there's no war), the other is unrecognized (yet) and will fight only with the power of NONVIOLENT POPULAR RESISTANCE. Who will win?

I forecast that Catalonia will prevail. Why? Because they have already demonstrated their willpower, discipline and nonviolent firmness, in previous confrontations such as the referendum of October 1st, the General Strike of October 3rd and many other episodes of popular struggle in the last many years.

Against that determination Spain can only exert force. Its appeals to Catalan unionists to walk out have failed (sure: they brought many buses from Spain proper but rallied very few people from Catalonia itself) so they only have the farce of Spanish laws and courts that are, since today, not legal in Catalonia anymore. And they have 95.000 ill-paid and overworked police agents who will soon be shown as useless to implement Spanish law against millions and millions of disobeying Catalans.

Catalonia is Kosova on steroids: it is much larger, richer and visible than poor little Kosova was when it had to confront, in the pre-Internet era, a similar situation. Back then it was obvious that any solution not implying the independence of Kosova would fail. It took eight years of very brutal Serbian occupation but they eventually succeeded, not without a blitz war.

The situation is nevertheless different in Catalonia: Kosova did not matter, it was a mere humanitarian issue, but Serbia/Yugoslavia did not matter much either. Spain however has major geostrategical relevance because of the Strait of Gibraltar (plus French historical backyard geostrategy), so its NATO allies won't betray her. But Catalonia also has major strategical relevance, being one of two main knots linking the Iberian Peninsula to Europe (the other is the Basque Country) and this is a trump card the Catalans can play: sabotaging via strikes and blockades the commercial routes will no doubt have a demolishing impact in Spain's economy and its international reputation.

Additionally Spain is effectively bankrupt: only the European Central Bank buys Spanish bonds these days, the pensions' reserve fund has been exhausted and Spain is financially unable to pay for almost anything. This is going to lead to a major crisis in Spain but a crisis that will shatter Europe and the World. Because so far the bankruptcy crisis had been delayed in Europe so far but now it will become absolutely unavoidable.

That's the bargaining chip of the brave Catalan People: that's how a People determined to fight (noviolently) can bring the World to a halt.

Catalonia will be free. The whole World Order (itself in deep crisis) cannot impede it. How could it? Catalonia is (together with the Basque Country) the motherland of Insubmissió: some three decades ago we gloriously defeated the Spanish Army with NONVIOLENT RESISTANCE, and Catalan society has learned that lesson well, probably better than us Basques. They cannot be defeated, they will prevail and teach the World a lesson.

* Every Spanish province, regardless of population or ethnicity, gets 4 senators, three of which go to the most voted party and the fourth to the second one. Most Spanish provinces are rural, nearly empty provinces of Castilian or assimilated ethnicity.
Posted by Maju at 10:47 PM No comments:

Yesterday morning the Spanish Inquisition (Audiencia Nacional, its conceptual heir) jailed Jordi Sánchez (Catalan National Assembly) and Jordi Cuixart (Omnium Cultural), leaders of two of the most important social movements that have been pushing ahead with Catalan patriotic mobilization and the process of self-determination.

Protests have been massive across the country. Another sign of Catalan independence being absolutely impossible to repress: 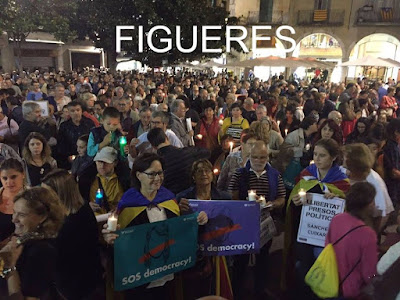 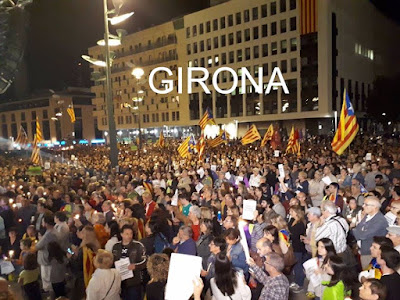 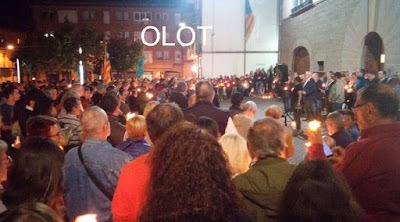 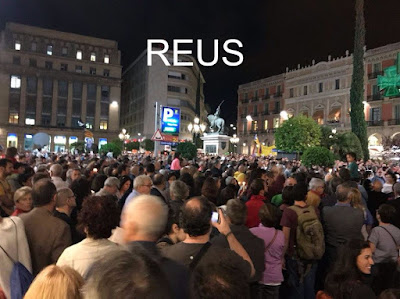 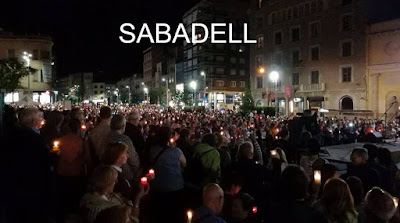 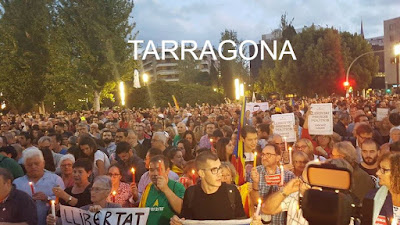 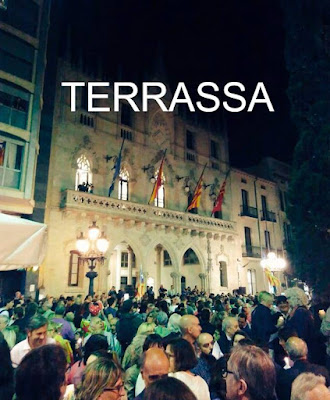 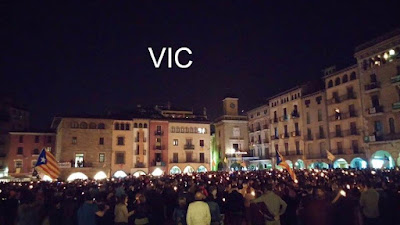 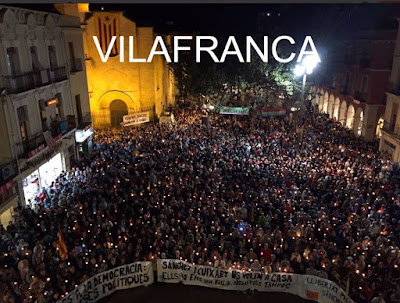 There have been also some protests in Madrid, the Basque Country, etc.

(Credit for most pictures: CjSand).
Posted by Maju at 11:34 AM No comments:

Viva the Farmers!!
They won't be able to do anything against an organized People.

Today a General Strike for freedom was called in Catalonia by several minor labor unions including COS, CGT and CNT and backed by the CUP (socialist independentist party). This call was made several days ago, even before the brutal repression of this Sunday.

In order not to be displaced by a call they did not control but that was going to be followed anyhow by most Catalans, the "moderate" camp has called for a day of "National Halt", which has been seconded by other unions, parties and even capitalists. It is unclear how exactly such a thing as a "National Halt" happens but it somewhat overshadows the fact that there is a political general strike called by the most combative unions and the CUP.

In any case the General Strike has been a massive success: Catalonia is nearly stopped, except for multitudes protesting nearly everywhere. Romanian homeless activist Lagarder Danciu, who forged a name for himself by staging one-man protests against corruption in his adoptive homeland, among other activities, offers us an example of how massive this is:

Another visual example of how a true General Strike is made is offered by this photo shared by one of my favorite bloggers, Borroka Garaia Da! (It's Time of Struggle!):


If you follow the link, you will find the Spanish-language version of the communication of Endavant (Forward), the more radical (i.e. more coherent and serious) half of the CUP.  They argue that the referendum was a success in spite of all the repression and that it was an overwhelming victory for the "yes" to independence.

Therefore they say that a Catalan Republic must be proclaimed this very week, rejecting any call for "pacts" or "dialogue", which would be attempts to invalidate the referendum.

They call for the General Strike, they denounce the brutal repression against the Catalan people and they argue that the forces that oppose Catalan independence are the same ones that are attacking the rights of the working class. They conclude that:

The General Strike must be the starting point for the Popular Movement to move ahead, to change everything, to guarantee the conquest of social and labor rights and for the implementation of the right to self-determination.

Visca Catalunya lliure! Viva the struggle of the Peoples!
Posted by Maju at 5:40 PM No comments:

Catalonia defeated Spain by sheer will of freedom 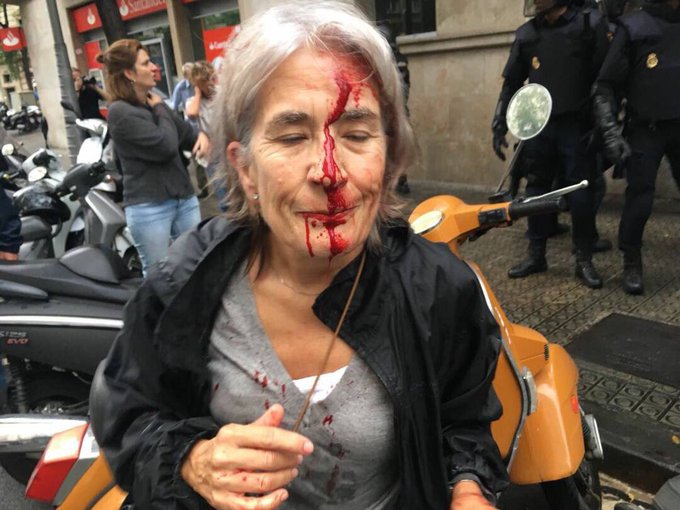 Yesterday it was a most important day. You all surely know by now about the brutal repression by the Spanish police forces against the Catalan independence referendum and, most importantly, about the brave popular resistance by millions of self-organized citizens in each and every electoral center.

One could get lost arguing on the validity of the vote under such quite obviously exceptional and most difficult circumstances, what really matters is the civic pride and nonviolent power demonstrated by the Catalan People, and, on the opposite side, the blind brutality shown by the Spanish state, determined to defend the francoist concept of "indissoluble unity" of the state no matter what.

What really matters is that, maybe more than ever before, the State of Spain has been shown to be morally bankrupt, a true failed state in the making. Hopefully the socio-political crisis will extend to the rest of the lands occupied by the residual empire. Some signs of it happened yesterday, with thousands protesting in Madrid and Seville, among other Spanish cities (and also in places like London, and earlier in Bilbao and Amsterdam, etc.) in solidarity with Catalonia and its right to self-determination.

Tomorrow there is a General Strike called in Catalonia in support for this right to choose but, quite obviously, marked also by the rejection to repression and authoritarianism. Even if the unions calling for the strike are relatively small (nationalist union COS and libertarian unions CGT and CNT), the strike is backed by the major civic force in all this Catalan uprising: the Catalan National Assembly (ANC) and its right-wing ally Omnium Cultural, as well as by key political forces like the Popular Unity List (CUP), so it is predictable that it will be a massive walk out.

However this is only one step and one restricted to Catalonia. In my opinion, what will be critical now is whether Spaniards themselves will begin mobilizing, not just or mainly in solidarity with Catalonia, but on their own platforms such as the demolition of the mafioso authoritarian regime consecrated by the controversial constitution of 1978, which was agreed behind closed doors and backed mostly because anything was better than the Fascist dictatorship.

The constitution is nearly impossible to reform (needs a wide agreement of all-Spain parties because of a horrible electoral system that massively favors rural Castile and hence conservative forces), so only forcing the hand of the twin party system PP-PSOE will work. It's even reasonable to consider that only a true revolution, a constituent process from below, will do the job.

Sadly enough, the big political hope of Spain, the novel party Podemos (We Can) has so far limited itself to posturing. They basically seem to restrict themselves to try to form a coalition with the PSOE (center-left?) and only very slowly advance on the path of reforms. Clearly insufficient. Also they are clearly renouncing to resort to mass mobilization, which is happening on its own, and they have growing internal quarrels.

So it is unclear how the situation will evolve. Yet it is clear that it is evolving and very fast.

Once again my applause and respects to the brave People of Catalonia for daring to defend their freedoms in what is clearly an example for the rest of Europe and the World. Visca Catalunya lliure! Viva the struggle of the Free Peoples!
Posted by Maju at 1:25 PM No comments: