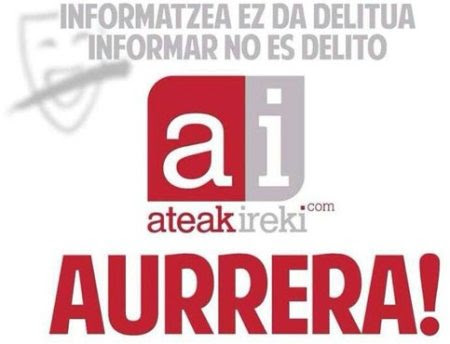 I have to (briefly) interrupt my blogging hiatus to report a most brutal abuse against freedom of speech in the Basque Country: the Spanish Inquisition (Audiencia Nacional) has decreed the illegality of the news website Ateak Ireki (Open the Gates), which has been a major and steady source of information for this blog and lots of people.

The decree is not firm and can be appealed but we have seen before how such legal routes are delayed indefinitely in the cases of newspapers and other media, so it could take many years or even decades to reverse this censorship by mere legal means, if at all.

Naturally I can't but flatly reject and denounce this new attack against freedom of speech in the Basque Country by the occupant power of the South. There's little more that I can say other than thank the people behind Ateak Ireki for all their hard work and hope that new venues of free information are opened soon.

I must of course underline how this is yet another major aggression by the neo-fascist regime of Spain against the feeble and nearly non-existent "peace process", but, even more importantly, against the most basic human rights: freedom of opinion, freedom of speech and freedom of information.

There is only one way out of this perpetual Spanish fascist imposition: independence!


Update: I'm still getting the feed from Ateak Ireki, 11 entries in the last few days with contents like:
And then of course a commentary on their own forced closure, which I translate here in full [in square brackets = my own translator notes]:


The Spanish emergency tribunal bases its decision on a report by the [military police corps] Guardia Civil to relate this medium with Herrira [prisoner rights movement recently persecuted by the same court] and this way end its journalistic activity. The resolution of the AN can be appealed.

Ateak Ireki could be closed by the Audiencia Nacional. The Spanish emergency tribunal bases this new attack against freedom of speech on a report by the Guardia Civil, which relates this communication medium with the movement Herrira, against which it acted on September 30, arresting 18 of its members.

The Audiencia Nacional has issued an order demanding to several telecommunication media to impede access to Ateak Ireki, as well as to the closure of their social media accounts and the webpage itself.

This decision is not yet firm and can be appealed, although we ignore if in the upcoming days or hours the webpage or our social networks will stop being operative.

A sad day for democracy

From Ateak Ireki, in a preliminary emergency evaluation, we denounce this new attack against freedom of speech and information. We want to recall that Ateak Ireki arose from the impulse of dozens of Navarrese journalists who, after the closure of Apurtu.org, advocated for small media like ours to have space in the communication panoramic and for the freedom of information and speech to be respected. Therefore we believe that today is a very sad day for democracy in the Basque Country and that again the Audiencia Nacional is deciding what must and must not read the citizenry, just like the Spanish Inquisition used to. Ourselves resolve to confront this new attack against democracy with the only weapon on our hands: the exercise of freedom of speech.
Posted by Maju at 9:33 PM No comments: