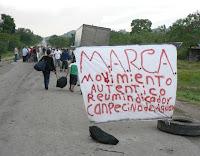 The struggling communities of Bajo Aguán, which have been murdered and violently repressed since the fascist regime of Porfirio Lobo took power in the 2009 coup, are again facing state and landowners' repression.
Lista Informativa Nicaragua y más[es] reports that a strong force of soldiers, police agents and private security guards of landowner René Morales have surrounded a group of some 300 peasants from MARCA, a peasant militant organization.
On April 30, the peasants recovered the lands that they claim as their own and since then they have been suffering siege and shootings from the various armed forces, resulting in two injured in the last attempt, in which the troops used "high caliber guns".
The peasants have been besieged for a week, unable to exit the cooperative and reaching their limits of food and water reserves.
The peasants organized in the MARCA movement have been struggling for some 16 years against palm oil businessman René Morales, who robbed their lands. As the tribunals often support the landowners, the peasants have been forced to take direct action and exert active democracy in order to recover what is theirs.


Thousands protest against the campaign Honduras is open for business 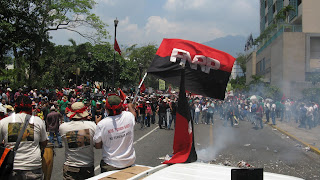 Thousands of Hondurans rallied at San Pedro Sula, the economic capital of the country, against the Capitalist performance Honduras is open for business, which attempts to restore a a false sense of normality to a country under de-facto military rule.

Worse the campaign is in fact an act of economic terrorism against the nation, promoting transgenic crops and other forms of plantation economy (palm oil, sugar cane), as well as hydroelectric and tourism mega-projects. Anything but sustainable and friendly for the People and Nature. 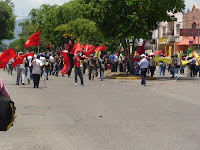 The dictatorship is so desperate for investment in the ongoing situation of permanent instability and a popular revolution always menacing at the next corner that they are offering almost tax exempt conditions and the ability to legally exploit Honduran workers beyond what is already "normal".

Even if the protest was peaceful, the Civil Council of Popular and Indigenous Organizations of Honduras (COPINH) reported that three of its members had been arrested and tortured. These are José Alexis Gómez (17), María Leocadia Hernández (40) and Yovana Isidora Cabrera (23).