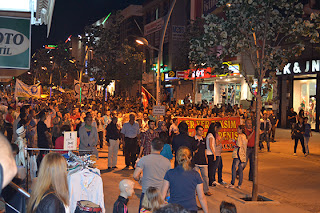 Ankara: police attacked the demonstrators at Kennedy Street soon after midnight. Hundreds concentrated in Batıkent under the heavy rain.

Istanbul: Taksim Square was retaken by protesters soon after police had evicted it. The occupation continues as strong as ever. A piano concert was offered by David Mortello.

There were also important marches in many quarters of the bicontinental city: Gazi, Bakirkoy, Kadıköy, Moda, Kartal, Eyüp, Sarigazi. Another popular occupation was initiated at Matepe Square.

Adana: Atatürk Park has seen major protests in homage to those killed and injured during the first weeks of the revolution.

Memorial to the victims

The same site also has a list of the three mortal victims of police violence so far and the ones known to have been permanently wounded.

Paying homage to the victims of repression seems to have been important in the last protests. In Taksim they did this in their honor:


As the governor of Istanbul, Huseyin Avni Mutlu, asked parents to call their children back home (even if many protesters are clearly quite mature), mothers of protesters organized their own human chain surrounding with their bodies and hands the square that has been the epicenter of the popular uprising. 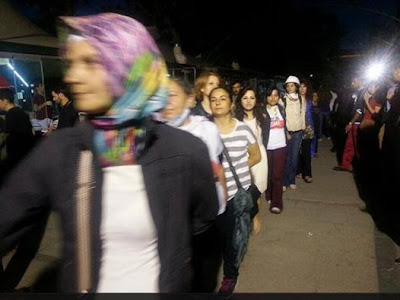 They chanted "side by side against fascism", "the government must resign", "don't touch our children" and "Abdullah Cömert is our kid".


Videos of the brutal, pointless and brief police takeover of Taksim Square are available here.

This video of the early struggles between police and communist protesters in Istanbul has been known to me today, although it is dated to June 1st:

Kurdish banners and dances at Gezi


It is not clearly understood or often explained but it seems clear that the Kurdish community of Istanbul was key in the unfolding of the revolt. Here we can see them at Taksim Square (which is located in a largely Kurdish neighborhood) dancing and showing banners that would be brutally repressed just a few days ago, including one with the face of Oçalan. The video is dated to Jun 5th:

The reactionary Spanish government became one of the first ones in the European Union to show absolute solidarity with Erdogan[es].

Foreign Minister J.M. García Margallo told the EU leaders not teach lessons to Turkey (meaning Erdogan) on how to deal with demonstrations, offering the solidarity of Spain (meaning himself and his rapidly declining party).

No doubt García Margallo is worried that what today is happening in Turkey may well happen any day (again) in Spain, where the situation is very similar, with a government shattered by the massive reaction against its ultra-liberal policies, corruption scandals and lack of steering power.

There are way too many parallels between Turkey and Spain, historical and contemporary. I would dare say that their destinies are mysteriously linked even before Lepanto: they grew at similar rhythm, declined at similar rhytm and even have quite comparable geographies and similar attitude of blunt oppression against ethnic minorities.

Naturally García Margallo knows that, at least intuitively, and fears that the Turkish Spring may soon manifest as Spanish Autumn and that he and his pathetic boss Rajoy will find themselves in the same impossible situation as Erdogan.
Posted by Maju at 12:55 AM