Brazil: what do they want?

That's what Tsavvko ponders today, in first person plural, at his blog[por]: what do we want?: 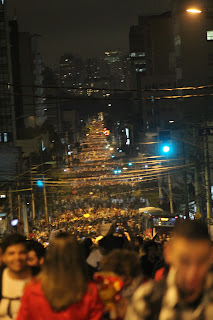 The revolt was not born because of 20 cents, 10 cents nor 30 cents. It only EXPLODED after simultaneous rises in all the country. While the PT claims that the whole country is doing very well, the people on the streets showed that this image is not real. We are not smiling with the Cup, we are not happy with education, with culture, with health...

Natives are massacred and abused in their lands, in truth many are losing their lands, LGBT people are murdered on the streets just for being in love, the periphery cries against the genocide it suffers, and all the population revolts against a politics of identical options, without alternatives, in which PSDB and PT get dirty into mutual accusations but are just two sides of the same coin: corrupt, privatizing, giving away the nation, worried only for getting rich themselves and not for transforming the country.

We face a wave without precedent of conservatism, of religious medievalism, of attempts to destroy the judicial power instead or reforming it and turning it more democratic. The people exploded against a corrupt Congress and state parliaments, disconnected from the reality of the people. While we take the packed buses, subways and trains, the politicians impose their own private patterns using luxury cars paid with our money and live in mansions out of the reach for the vast majority of the people.

We fight and are out in the streets for dignity, for respect.

Now, why all the demonstrations through the country?

First, we are unsatisfied with the Cup, with the absurd expenditures (...) a demonstration of the political incapacity of Dilma and allies.

Second, we are also unsatisfied with the violence displayed by governments and police commanders in agreement, as well as with the scoundrel mass media which had to change sides after they were themselves victims of police violence.

Third, we are unsatisfied with the daily problems of the country: education, health, culture...

The paths are many, the claims are many and none of them is contradictory, in fact they are complementary. We want a new model of country, a human, just Brazil for us the Brazilians (and whoever else lives here, naturally), and not for a bunch of tourists who come for the Coup and then leave.

The PT does not manage to understand what happens and uses its fanatic clique in order to attempt to demobilize and also co-opt the masses. And they fail miserably.


As I said before, a large fraction, if not the majority, of the demonstrators never before protested at all and, in the case of the youth, it does not feel itself represented by the PT and much less falls in the trick of "greater evil" used by the PT. (...)

It must be said that Brazil is no island. Protests shatter the World: indignados, against austerity, against dictatorships, for freedom, against islamization... These are paths that look different but have the same character: the dissatisfaction of the population, very especially the youth, with institutional and traditional politics, a disbelief towards political parties and the search of real and effective social changes.