Turkey: Erdogan's last stand? The most brutal repression falls over Turkey... but the revolution is stubborn

But the most brave resistance of the People is if anything encouraging. This is far from over.

21.09 Police have entered Gezi Park, they are beating people up and taking down the tents. Members of the press are not allowed inside.

21.15 Police continue attacking the people gathered in the streets. 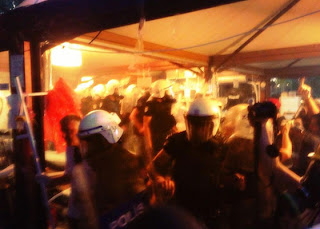 21.37 Police have trashed the medical clinic inside Divan Hotel, Taksim

22.00 Thousands of people have assembled in Sarigazi, Cekmekoy and Kartal (on the Asian side of Istanbul) they are marching on Taksim.

Thousands of people have assembled in Bakirkoy.

22.15 Police are attacking protesters in Mecdiyekoy.

Police are assaulting the main gates of Divan Hotel where hundred have taken refugee.

22.19 Ali Çerkezoğlu, head of the Turkish Association of Doctors (TTB), has said "If this attack continues for even one more hour, tonight will be Turkey's darkest night."

22.37 The people of Kurtulus are on the streets chanting, the sound of pots and pans clanking in protest have filled the districts. Many have been wounded due to police brutality.

22.55 The Crowd marching from Gazi Quarter has reached 50,000. The police have broken into the Divan Hotel where the wounded had taken refuge.

23.09 Tens of thousands of people gathered in Kadıköy (Asian side of Istanbul) are meeting with the crowd arriving from Bagdat Street in order to march on Taksim.

23.12 People assembled in Ortakoy (Istanbul) are being atacked by the police. The crowd is not scattering despite the poliçe assault.

23.27 Thousands of people assembled in Bakirkoy (Istanbul), the crowd is becoming ever the more numerous as people are marching through the neighbourhoods.

23.28 Police are attacking the people of Mecdiyekoy with excessive amounts of tear gas and asphyxiating gas. Plastic bullets are being used indiscriminately.

23.33 Hundreds of people in the Gazi Quarter of Istanbul have blocked the traffic on the highway.

23.38 The Dame de Sion High School has been turned into a medical clinic.

23.40 The tens of thousands of people assembled in Kadikoy have reached Uzuncayir (on the Asian side of Istanbul, near the bridge).

23.42 The crowd in Akaretler (Besiktas-Istanbul) are holding a banner bearing the words "The Gezi Martyrs are Immortal."

23.46 The police are attacking the people in Uzuncayir. The crowd is not dispersing despite the brutal assault.

23.52 Thousands of people marching from Nisantasi to Harbiye.

23.54 The people of Gazi Quarter are getting closer to Taksim. 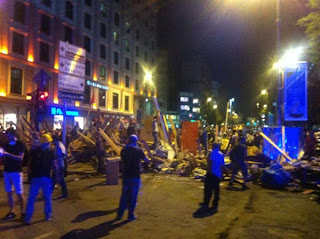 23.56 The German High School has opened its gates for the injured.

23.57 The minister of EU affairs, Egemen Bagis, has said "all those who participate in the Gezi protests will be tried as terrorists.

00.04 The police have blocked the entrances to Kadikoy. 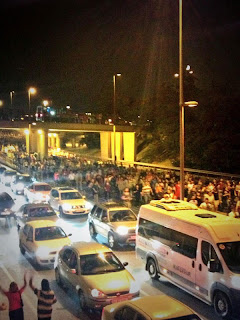 00.05 The people are waiting in fron of the police barricade in Uzuncayir. The crowd keeps growing (photo).

00.06 The police are shooting gas canisters around Taksim Ilkyardim Hospital.

00.07 Head of the Turkish Association of Doctors, Ali Çerkezoglu has said: "As the doctors, we declare that we shall tend to all our citizens wounded in the protests."

00.08 Barricades formed in the fish market on Istiklal Street.

00.15 People are on the streets in Findikzade, clanking pots and pans.

00.20 Sainte Pulcherie High School has opened its Gates for the injured.

00.22 The crowd from Bahçelievler has reached Topkapi.

00.38 Tens of thousands of people gathered in Osmanbey, chanting "the government must resign." Police are firing blast bombs on the crowd.

00.46 Police have attacked the people in Osmanbey.

00.48  The police are shooting gas canisters in Osmanbey. The crowd is retreating to Mecidiyeköy and Kurtulus.
00.54 The people of Gazi Quarter have reached the Sadabad junction, the people of Ornektepe have joined the demonstrators. Police have started shooting gas bombs at the people.

00.55 Detay Muzik, a store located near the place Hrant Dink was murdered is playing Bella Ciao. Tens of thousands are singing along.

00.58 The police have attacked the people of Ornektepe with gas bombs and plastic bullets. The people are clashing with the police.

01.00 RedHack, has hacked the TV channel of the parliament.

01.02 The people have set the barricade in Nisantasi ablaze.

01.05 Thousands of people are marching on the E-5 highway to join the crowd marching to Taksim from the Asian side.

01.06 The people have formed barricades around Osmanbey Metro Station. The police are shooting gas canisters while the people are responding with fireworks.


01.28 The police have entered the Hilton Hotel. 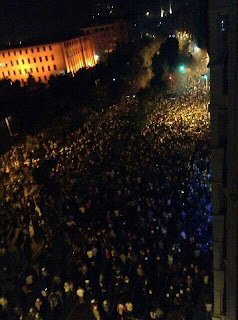 01.40 The people of Harbiye (photo) are chanting the slogan "Tayyip Must Resign!"

01.41 The people have blocked the traffic on Incirli Street, Bakirkoy.

01.50 The people from Kartal, marching on the E-5 Highway, have passed the Bostanci junction. Tens of thousands are joining the mass.

01.54 The crowd in Uzuncaiyr (near the Bosphorus Bridge) have overcome the police barricade and are marching towards the bridge.

01.58 The police continue attacking the people in Osmanbey.

02.06 After the police assault in Osmanbey the masses have begun marching towards Taksim. The Ramada Hotel has been turned into a medical centre.

02.12 The police have attacked those marching towards the Bosphorus Bridge.

02.15 The police in front of the Divan Hotel are marching towards Harbiye. Military panzers have arrived and are attacking the people.

02.20 The police continue attacking the crowd marching towards Taksim from Osmanbey. The crowd is not retreating and is forming barricades in the alleys. The people are chanting "side by side against fascism!"

02.23 Live streaming TV channels are being prevented by the police.

02.33 The police contiune their attacks on Halaskar Gazi (Sisli). The police are trying to divide the crowd, yet they are unsuccessful.

02.40 The police have attacked the crowd marching towards the Bosphorus Bridge.

02.42 The crowd from Gazi Quarter continue their resistance near Okmeydani, despite the attacks of the police. 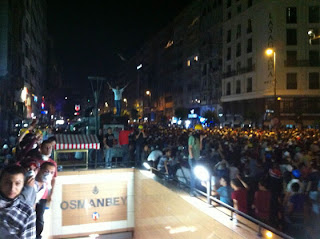 02.44 The crowd in Osmanbey are chanting "Taksim Will Bury Fascism."

02.51  The police have crossed the barricade in Osmanbey. The people are retreating towards Rumeli Street.

02.59 The people are on their way towards the Bosphorus Bridge from Altunizade (the Asian side of Istanbul).

03.00 The police are attacking people in Okmeydani.

03.03 The police are attacking the people in Altunizade. Excessive use of gas bombs reported.

03.05 The police have used extreme violence against the crowd near the bridge, the people have scatterd to the alleys.

03.15 After the attack on Uzuncayir, it has been reported that a student of Yildiz Technical University has been hit on the head with a gas canister and has been critically wounded.

03.25 The police continue attacking a crowd of 10,000 gathered in front of Taksim Ilkyardim Hospital. 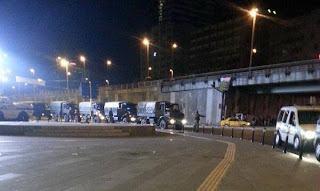 03.34 Soldiers are waiting on the Bosphorus Bridge (photo).

03.44 Thousands of people assembled in Pangalti.

03.48 The police and the military shooting gas bombs at the people in front of the Bosphorus Bridge.

04.00  The police continue attacking the crowd assembled in front of the Taksim Ilkyardim Hospital. The police are not ceasing their assault. 4 riot police have been seen beating a demonstrator to death in Kucukparmakkapi Alley. The protesters have carried the wounded demonstrator to the hospital.

04.30 The police is firing rubber bullets at the moment in Cihangir.

04.45 Troops are on the streets of Mecidiyekoy.

05.00 Clashes continue around the Bosphorus Bridge.

05.45 Protestors are still on the streets, the police continues its attack in more than 20 quarters. 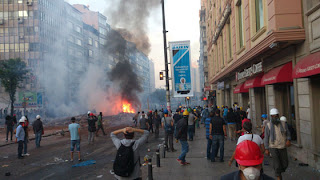 06.00 The police withdrew from Harbiye, barricades are being erected (photo).

07.00 Taksim Square is being evacuated from civilians.

08.10 Clashes settled down for now, demonstrators will gather at 16.00 at Taksim Square.

09.15 Reports indicate that clashes are still going on in Harbiye (→ live stream). 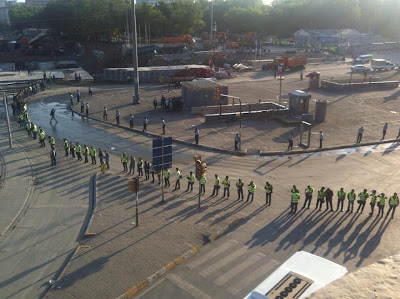 This, repression and resistance, is not, of course, limited to Istanbul, even if the reports I have mostly focus on this iconic city, the largest by far of the Turkish Republic. At least in Ankara there are reports of huge demonstrations and police getting ready to attack them (yesterday night). 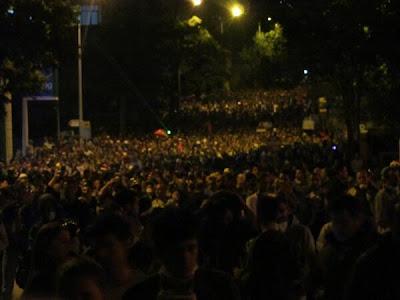 
A General Strike has been called for tomorrow, Monday (several scattered sources). 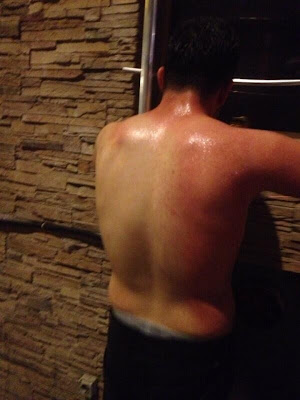 One thing I have clear by now: this is in no way smaller nor substantially different than what happened in Egypt in 2011.  The Turkish and Kurdish Peoples are clearly determined to remove Erdogan from power and they will no doubt succeed in spite of the brutal repression, which cannot continue for much longer without implosion in the structures of the state.
Posted by Maju at 12:16 PM