A game of life and death 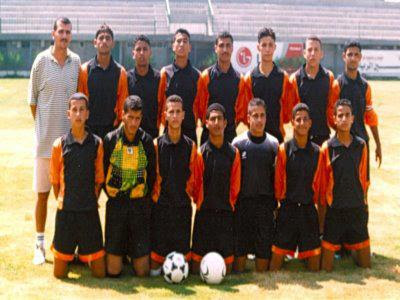 As the media focus on the Euro2012 competition, let's hope they don't ignore a football star for whom "sudden death" would not just mean a penalty shoot out. Mahmoud a-Sarsak, seen above and with his team in Rafeah, southern Gaza, is in danger of death after nearly ninety days on hunger strike in an Israeli prison.

The 25-year old Palestinian who started kicking a ball in Rafeah refugee camp and made it to his country's national side, has been held for three years without trial under the Israelis' Internment of Unlawful Combatants Law of 2002.

A-Sarsak was arrested on 22 July 2009 at the Erez crossing on his way to join the Balata soccer club team in Nablus. Since being arrested, a-Sarsak has not been allowed to speak with his family as the ISK prohibits security prisoners from using the telephone, and a-Sarsak’s family has not been able to visit as Israel has completely prohibited family visits for all prisoners from the Gaza Strip.

Full story at Random Pottins.
Posted by Maju at 9:42 PM