Homage to antifascist fighters at Bilbao 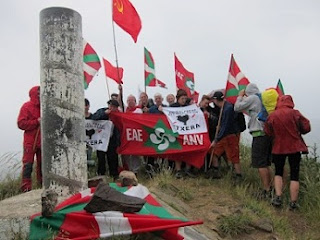 Malmasin is a hill south of Bilbao which most people know for the homonym tunnel that goes under part of it. But historically it was the top that was more important, hosting an Iron Age settlement and being also important in the struggle against the fascists in 1937.

Today citizens from the popular neighborhood of Abusu marched to it with Basque flags and banners of the historical and now again illegal party Basque Nationalist Action to the summit to pay homage to those who died defending our rights and dignity against fascism.