Is Japan heading for a Tahrir moment? 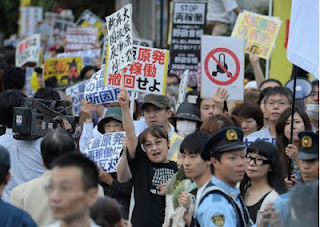 Something that is clearly leading the way against the systemic corruption of political leaders these days are spontaneous demos called out by means of Internet, which sometimes capture the social mood and become snowballs that can't be stopped until they complete their natural trajectory.

This seems to be happening in Japan right now. After various weak attempts to organized demonstrations and popular resistance against the criminal institutional mismanagement of the nuclear catastrophe of Fukushima, the reopening of the Ooi nuclear power plant seems to have finally drawn Japanese people to the streets to vent out their anger at the gates of the Prime Minister's palace.

The Japanese are a very formal and generally disciplined people who are not easy to come out to protest. In this sense, the growing numbers of the latest Tweeter-called protests are ringing all the alarms in the East Asian Police State (alleged "democracy" where the will or even the safety and health of the People does not matter at all).

Because they have nothing to lose anymore. You are pushing us all too far... and the Japanese People are no exception. Things are changing even if you do not realize: the Peoples of the World are wakening to their real power.

Update: some more info and photos at Ex-SKF.
Posted by Maju at 8:10 PM