Another week of protests in Madrid 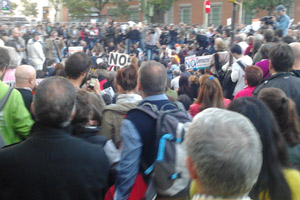 The 25-S movement, aka "Surround Congress", which is essentially grassroots assemblies of angry citizens as far as I can tell, has called for another week of protests in Madrid against the new round of criminal austerity budget (except for the Army, Police, prisons, banksters, politicians and monarchy).

All demos are illegal because the authorities have been punishing those who made legal calls with sheer fines. Not that the legal status is deterring people from taking part and that, I'd say is important in itself, as it was last year with the plazas movement, because tyrannic laws deserve to be breached (this is a long held legal-philosophical doctrine since Vitoria at least, I'm not making up anything new).

The demands? The people wrote them on cardboard pieces and hang on police fences: 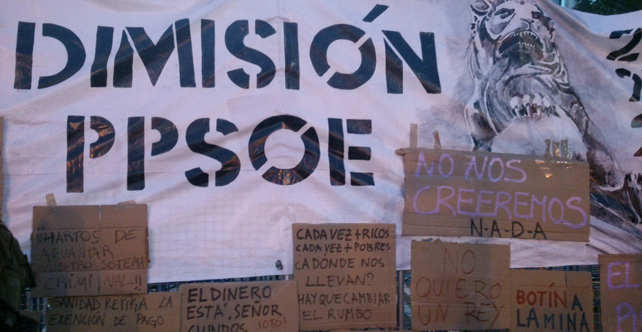 Resignation PPSOE [hybrid acronym of the twin ruling parties: PP and PSOE]
We won't believe anything
I don't want a king
[Banco Santader owner] Botín to the mine
Tired of putting up with this criminal system!!
(etc.)

Let the bailed out ones pay for the bail out
Not to fulfill electoral promises must be illegal, besides of immoral
From my taxes to the Church: 0 - secular, universal and free education
Dignified salaries for the politicians - suppression of the Senate
Effective struggle against tax fraud
I don't want a king


Right now (c. 21:00 CET) there should be an attempt to physically surround the Congress, which may end up in violent police intervention, I presume.

Police used diverse tactics like cutting access streets so people could not arrive to Neptuno Plaza and threatening with hefty fines to those who remained there after 21:00.

The tactics seems to have worked because the overall affluence was smaller than in previous such protets.

The protest was called out at 22:00 but there are new protests planned for the 25th and the 27th.