Non-obituary: the witch is dead, people went out to party 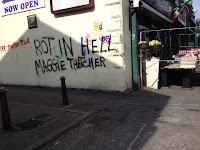 Not in many decades has this happened, not at least since the days of the French Revolution or the popular hanging of Mussolini. Very rarely the death of a key political leader was so much celebrated. In all Britain and Northern Ireland groups of people wen out to drink for her to rot in Hell.


Thatcher began pumping air in the ice-cream and continued her career by pumping air into the economy, creating the speculative credit bubble to feed the parasitic-sadistic system by which private monopolistic companies are paid by people's taxes resulting in hideous services and the total loss of division between the res publica and bloodsucking capitalism.

We are still living under Thatcher's Hell and I can only hope that her physical death announces the death of this horrible decadent suicidal social system I had the bad luck to live under.

May you die a billion painful deaths along with your friends Pinochet and Reagan, witch!
Posted by Maju at 10:30 PM