USA bans food imports from almost half of Japan

Nothing less than 14 Japanese prefectures have been banned from exporting food to the USA. Previously it was just eight. 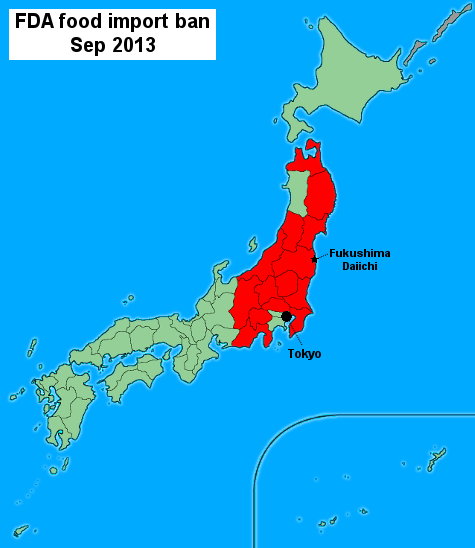 For some reason, two of the the three prefectures of Greater Tokyo (Tokyo and Kanagawa but not Chiba), totally surrounded by the banishment zone, are still allowed to export to the USA. Akita, in NW Honshu, is another pocket inside the red zone.

Of course, it is very logical and reasonable to ask how can any international level games such as the Olympics be held in such conditions, but even more reasonable is to ask why is there not any plan to evacuate all that zone or at least the most severely affected areas? The children even? I know we are talking of millions but, well, precisely: Holocaust by conscious inaction is not any better than Holocaust by action.

This is the largest trade ban of the many that (very justifiably) plague Japan since the Fukushima nuclear catastrophe. For comparison, South Korea has a ban only on seafood and only affecting eight prefectures, while China and Taiwan ban food from 10 prefectures.