Roadblocks and other protests are going in the part of Sápmi (Lapland) under Swedish control, against the project by Beowulf Mining and the Swedish state to develop new mines in Sami land. At least six people have already been arrested. 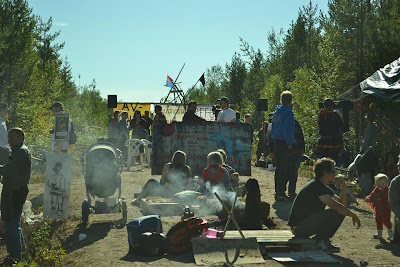 They make a call for help because the police are employing themselves in full force with the goal of allowing the miner corporation to begin mining in five days.

They are also standing as human shields in the security perimeter so no explosives can be used (legally at least).

I don't know you but I can't help thinking in the movies of Pippi Langstrup and the two pathetic cops Kling and Klang. I just hope that reality for once gets close to fiction.
Posted by Maju at 8:45 AM