Turkey: another night of clashes in Antioch

As mentioned yesterday, the city of Antioch has become another focus of the Turkish uprising. This is the chronicle of the night as told by Occupied Taksim (just changed the chronological order and corrected some typos):

23.00 One protester is arrested. Police is forcing its way through the side streets with scorpions (armed army vehicles).

23.10 The police threatens the people watching the clashes from their rooftops with going up there, they shoot gas cannisters to the rooftops.

23.25 The police and armed vehicles cannot get through the barricades erected by the people of Armutlu. Inhabitants of Armutlu and the protesters throw balloons filled with olive oil to water cannons. Protesters shoot fireworks to the police. 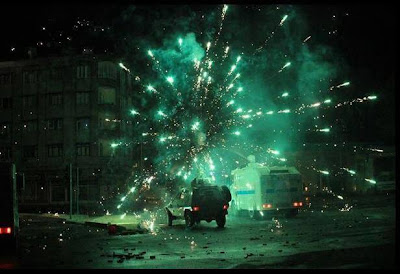 00.35 1 water cannon vehicle (TOMA) is destroyed by a water tank thrown from a rooftop.

01.00 As clashes continue, barricades are being set ablaze.

01.20 Inhabitants of Armutlu throw their furniture out from the windows to help the protesters build barricades.

04.00 Clashes seem to be over in Antioch. 10 slightly wounded, no arrests after one of the fiercest nights.
Posted by Maju at 6:40 AM