In yet another blatant example of how bourgeois justice is completely ideological and unfair, an unnamed blogger who was arrested on charges of inciting to racist and ideological hatred, was found to have not less than one hundred weapons, including four pistols.

He was let free, with charges, the next day.

Alright, maybe it is just that Spanish law is very lenient and the rights of the accused are being held sacred...

Let's see what happens when the accused is not a Nazi but a Lefty, for example what the Catalan police claims to have found in the homes of five recently arrested anarchists who are still in prison (and will surely be there for many years): 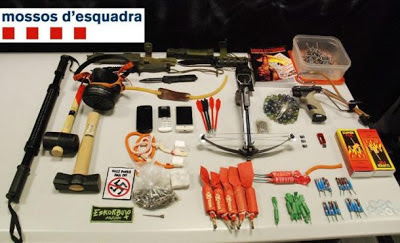 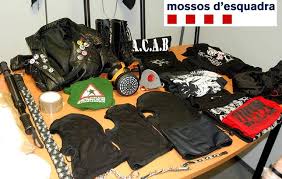 The extensive baton is illegal but it's usually added by police themselves, so most probably not real, as for the rest (excepting maybe the mini-crossbow) none is really illegal and most are not even worth recording - they obviously needed something to fill in their empty tables because we all have hammers, duct tape and t-shirts at home, right? Maybe even a couple of moldy books...

Of course we do not know how much of that is real and how much was added by police themselves in order to "enrich" their "finding", but in any case just compare with what happens if you are not a Red but a Nazi.

And this is not the only case at all. In fact it is very common: highly inflated charges, false evidence and, of course, no parole. That is, unless you are one of their Nazi friends, then you get a wrist slap and the red carpet out of police station.