The Empire forces Bolivian Presidential airplane to land in Vienna, evidencing its totalitarianism 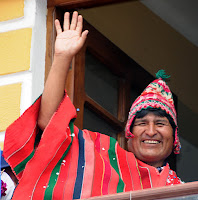 In the most scandalous diplomatic incident since there is any sort of international law, the Presidential airplane of Evo Morales was forced to land in Vienna yesterday night.

The versions so far contradict each other in the details but it seems that:

The only comparable (actually worse) violations of International Law in recent times have been the invasions of Afghanistan and Iraq by the USA (and vassals), in which no declaration of war was ever made. Excluding undeclared wars, we really have to dig in examples of very ancient times like the imprisonment of Richard Lionheart in Germany or the kidnapping, deceit and murder of Atahualpa by Pizarro.

And which is the pretext, the trigger of this unbelievable violation of sovereignty? The mere suspicion that whistleblower Edward J. Snowden might have traveled in that aircraft.

The Empire of Terror versus Chaos and Freedom


Why is the Empire, not just the USA but also its boot-licking European vassals, so extremely overreacting, not even doubting to show their darkest Gestapo sewers' reality as a few individuals like Julian Assange or Edward Snowden challenge their secretive core in demand of transparency, of freedom of information, of democracy?

As I see it, the reason is that the secrets that have surfaced are just the tip of the iceberg: there is much more to hide like, for example, all the Gladio network of terrorist-spies that acts as underground government through NATO and some other associated countries, the fact that the Al Qaeda is nothing but an imperial sockpuppet or the truth of 9-11 (and many other "terror attacks") being actually false-flag self-attacks.

Most people even today refuse to believe, in spite of all the evidence, that the 9-11 attacks were performed by the USA itself, as a self-coup to impel the imperial totalitarianism both inside and outside its borders, serving as pretext for military invasions outside and emergency rule inside. But what if papers demonstrating this or other similarly outraging maneuvers would come to light? What if internal evidence shows beyond any doubts that we do not live in "democracies" but in fascist regimes with a mere formal varnish, that we are ruled by a terrorist mafia?

The Empire is therefore most nervous and is sending a clear signal to all would-be whistleblowers and researchers of the "deep state" to cower in fear: we will persecute you everywhere in the World, just like Rome did with Hannibal.

Of course many others are just silently killed in "accidents", "suicide" in jail by hanging with their hands tied to their back, or, as happened to Petra Kelly and her husband (former NATO general Gert Bastian) are shot in the most mysterious circumstances and police decrees it was "domestic violence". Other less important ones may lose their jobs, as happened to a CNT research journalist and librarian when she researched the Gladio network in the context of Spain, or, many years before her, Interviú journalists who dared to do the same.

The shadow of Gladio, the "deep empire" is long and merciless. But then there are billions living precarious short lives on Earth, and many feel the need to do better than being cowardly accomplices of this machinery of terror... and the Empire cannot silence them all. This is surely the case of Snowden, who in spite of all, must feel he is for the first time in his life doing what he must, filling his existence with a wider meaning.

No, Chaos science does not allow for a perfect order in which everything is under totalitarian control forever, as in '1984': one gap after another will tear the dark curtain to rags. Such nightmare can only be a provisional situation, much more in the extremely complex and information-rich society we live in.