The source is a water discharge by Muehleberg nuclear plant, which is located some 20 km upstream the Aar river, some 13 years ago.

Geologists working in a unrelated project found cesium-137 at levels claimed to be not harmful but still well above what the power plant is allowed to release, especially considering that Lake Biel water is used for human consumption.

Greenpeace demanded that the Bern Canton prosecutor acts against the culprits. They also raised the matter on how the Federal Nuclear Safety Inspectorate missed the fault or, very possibly, decided to hide the incident.

The Muehleberg plant is located not far from the Swiss capital Bern. Switzerland has already voted to gradually close all nuclear power plants in the next two decades.


Update: EXSKF has more details: the radioactive releases were not just one but three: mid-1970s, early 1980s and around the year 2000. However even more important were the the atmospheric fallout from Chernobyl (1986) and widespread nuclear testing around 1963: 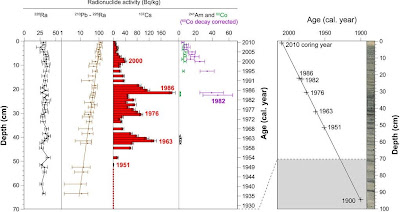 The full study (open access) is available at Springer Link.