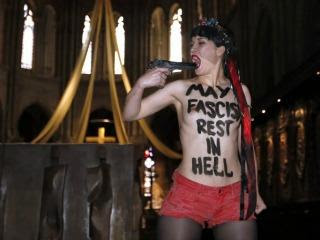 After an elderly fascist offered himself as human sacrifice in the weirdest homophobic action ever (and a totally anti-Christian stunt, it must be said), a member of the direct action feminist movement FEMEN has expressed what we all, people of good will, feel about that Nazi: may he be tortured in Hell forever and ever (sadly I do not believe in Hell, but it's a true pity that there's no such a place to make some justice for class A mass criminals like Hitler, Pinochet, Franco or Thatcher, just to cite a few).

The daring nonviolent activist, whose name is not yet known to me, in the usual topless style of this organization, carrying on her torso the legend "May Fascism rest in Hell", parodied the suicidal stunt of the fascist homophobe Venner.

FEMEN explained in their Facebook page that they "call for the death of Fascism in the same spot where far right activist Dominique Venner killed himself yesterday evening".

The daring activist, who was brutally arrested by police, also wore on her back the legend: "In Gay we trust".

Source and more photos: Webguerrillero[es].
Posted by Maju at 6:39 PM