Police forces entered today at the main hospital of Bilbao, Basurto Hospital, where some 50 workers were exerting a peaceful protest against budgetary cuts and healthcare privatization.

The action began this morning at 7:00 after 100,000 signatures had been gathered and sent to the Western Basque Health Service Osakidetza, whose politically appointed direction rejected to meet the representatives of the workers, backed by absolutely all the unions (SATSE, ESK, ELA, UGT, CCOO, LAB, SME and FFHE). As result the workers wen to Autonomous Parliament where they held meetings with all political forces excepted the ruling Basque JEL-ist* Party (EAJ-PNV, holding in extreme minority a highly unstable government with just 27 of the 75 seats), who refused to meet them.

By 12:30 police forces in riot gear evicted them forcibly, taking them out one by one, as they performed nonviolent resistance. This happened in spite of the agreement between workers and hospital direction to remove a camping tent they have placed in the entry hall of the hospital. 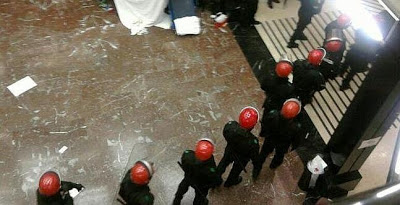 * JEL stands for Jainkoa ta Legi Zarra (God and the Old Law) and is how the Basque Nationalist Party defines itself in non-Indoeuropean language: JELtzale: JEList, possibly translatable as Fundamentalist-Traditionalist or something like that. It is the main party of the Western Basque middle and small bourgeoisie (big bourgeoisie rather look at Spanish parties) and under a pretense of nationalism or independentism it actually manages regionalist policies instead, almost invariably in agreement with Madrid.
Posted by Maju at 5:21 PM