A recent opinion poll by Spanish newspaper El País shows that the twin parties of the post-fascist regime keep collapsing together, while alternative forces grow steadily.

It is very apparent that the stagnated Blairite leadership of the PSOE, with the most uncharismatic Alfredo Pérez Rubalcaba (former Interior Minister under Rodríguez Zapatero, unable to formulate any alternative to the Troika or the PP), is not being able at all of scratching votes from the very apparent debacle of the ultra-conservative PP.

It is also notable how this party has lost in just few months nearly half of it's, often too loyal, voters, disappointed by the corruption scandals and very especially the dismantling of the scarce Spanish welfare system, as well as by the organized demolition of the real economy. Cutting pensions, firing able doctors, privatizing healthcare, allowing the plundering of savers, revealing the whole party as rotten by corruption and shamelessly lying once and again and again and again... has been too much for the patience of the right wingers of Spain, who feel betrayed by their own leadership.

In turn, voters who don't turn to abstention or blank vote (a form of civic protest expected to reach an unprecedented 9%) are picking two formations: United Left (akin to SYRIZA but with a much more aged and less combative leadership) and the maverick populist-fascist party of former Basque councilor Rosa Díez (ex-PSOE), Union for Progress and Democracy (UPyD), ruled by the führeress with iron hand and promoting essentially Spanish Nationalism of the worst class.

The resulting parliament, would elections be held now, could be like this: 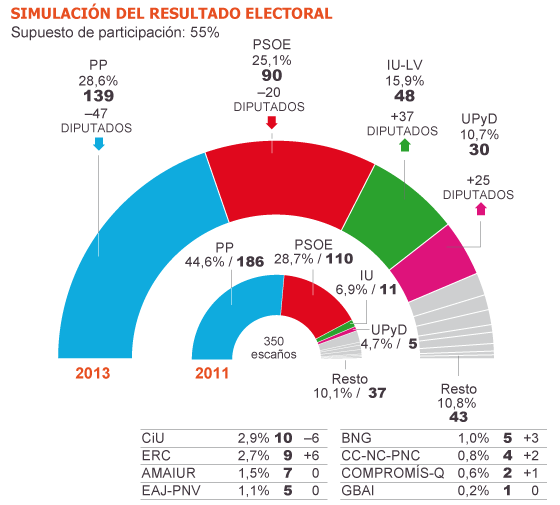 It is also noticeable that in Catalonia, Galicia and Valencian Country, nationalist left options are also growing (ERC, BNG, Compromís).

The result of such hypothetical snap elections would be a hung parliament, doubtlessly leading to a bourgeois coalition arrangement such as we have seen in Greece and Italy (and much like what was styled in Germany before the ascent of Nazism). There would be two similarly horrible possibilities: PP+PSOE and PP+UPyD.

However the most likely scenario today is that Rajoy will complete the term (up to November 2015) before holding any general election. Prior to that there should be regional (most communities) and municipal elections in May 2015 and there could also be snap elections in Navarre, where the conservative Spanish Nationalist UPN rules in minority and faces massive corruption scandals (but the PSOE, who holds the keys of power in the old Basque Kingdom, has so far rejected such possibility).

Whatever the case, the reality is that the current government's legitimacy is terribly eroded and that the traditional opposition (PSOE) is not being perceived as an alternative anymore either.