I really can't keep up with the pace of events. There's so much stuff going on all around! So I have decided to briefly mention some of them in link-list articles like this one.
Mexico: UN security staff attacks peaceful demonstrators and journalists at climate conference.
They rounded up the demonstrators and forced them to get into some bus. Photographers who imaged that were taken their accreditations. A journalist was also "arrested" into that bus, where he was beaten and had his camera stolen. As journalists protested, elements of the Presidential High Command intervened and beat them. (La Haine[es])
Honduras: peasants violently expelled from their lands
On Thursday heavily armed police and soldiers attacked the settlement of Paso Aguán (in the hot district of Bajo Aguán, department of Colón) expelling the peasants without judicial mandate and destroying their settlement (La Haine[es]). 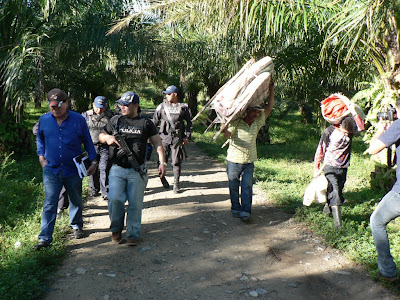 Greece: 75% prisoners in food protest
More than 9000 or the 12,400 prisoners of Greece have begun a protest in which they reject to eat anything served by the jails. Where no food shops exist, they are effectively in hunger strike. They have eleven demands (La Haine[es]):

USA: Georgia prisoners on strike for human rights and stop profiteering on their disgrace

They demand: decent living conditions, adequate medical care and nutrition, educational and self-improvement opportunities, just parole decisions, just parole decisions, an end to cruel and unusual punishments, and better access to their families. The article underlines how many basic prisoner services are given in monopoly to private companies who charge abusive rates for them, how there are no recreational facilities and nearly no training programs (Black Agenda Report[en])

Britain: violent repression in against students
Intercalating the highly controversial tactic known as kettling (corralling demonstrators and anyone who could be around like cattle for hours in the open) with cavalry charges, police repression has caused already 17 injured and 32 arrested. Two police are reported injured but one fell from his horse and was kicked by it while in the ground and the other was hit with a paint filled balloon, all what stands testimony to the peacefulness of the protest that has been again suppressed violently by the Metropolitan Police (La Haine[es]).
Follows video of the claustrophobic and dangerous extremes to which police kettling can reach:
15,000 Basques demonstrate at Baiona (Bayonne) against the High Speed Train (Gara[eu]).