Nations oppressed by Spain, show what they have playing football 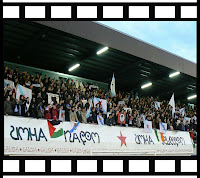 The Galician football (soccer for those in the USA) selection defeated Palestine by 6-3, the Catalan selection showed its level before Honduras by 4-0 and the Basque selection is playing right now against Venezuela (and I do not know the result yet).
While this division by nations is treated with total normality in Britain, where England, Scotland, Wales and Northern Ireland have each their own national team, in Latin Europe this is forbidden and therefore we cannot enjoy for example the probably quite decent teams of Brittany or Sardinia or the selections mentioned above in official international competitions.
Urban legend says that the real reason why the Spaniards do not want to allow national selections is because they fear being beaten on the field (and lose many of their best players, who often come from the oppressed nations of the periphery).

Previously to the Basque Country-Venezuela game there was a large demonstration  in Bilbao for officialdom of the Basque team.
Sources: Sare Antifaxista (1, 2, 3) and Askapena.