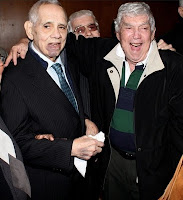 British blogger Charlie Pottins deals today with the Miami based terrorist mafias at the service of the White House. Something you don't read much about, much less in English language:


IT'S a happy picture, the two old friends and comrades in arms meeting in Miami. The man on the left is Orlando Bosch Avila, his buddy is Luis Posada Carriles, and if those names don't ring a bell straight away, because they have not been in the news much here, they will mean something to a lot of people in Cuba and other countries.

On October 6, 1976 Cubana airlines Flight 455 was destroyed, plunging into the sea soon after takeoff from Barbados. Two time bombs had exploded in the aircraft. All 73 people on board the plane were killed, including young members of the Cuban national fencing team, and five North Koreans.
Read the full story at Random Pottins.
Posted by Maju at 7:32 AM