If one thing is clear of Chile by now is that, with Pinochet or with his "democratic" successors, it is a Nazi Jacobin country where the rights of ethnic minorities, no matter how deeply rooted they are, are not respected, and instead they are being subject to systematic violence by the state in a bid to strengthen the colonial Spanish uniform "national" paradigm.
This is clearly the case with the Mapuches, a Native American nation which stood independent for all the colonial period by was unilaterally invaded by Chile in the 19th century, its territory annexed, the lands robbed to give to foreign landowners. I have more or less extensively in the past dealt with the difficult struggle of the Mapuche Nation in order to regain at least part of their sovereignty, freedom and dignity, stolen by the imperialist Chilean state (see here and here).

But till now I did not feel the need to report on the other surviving aboriginal people invaded by Chile: Polynesians from Rapa Nui (known as Isla de Pascua or Easter Island in the intrusive Indoeuropean dialects). Today I must: Chilean carabineros (military police) opened live fire with pellets against protesters in the Polynesian island who had occupied an area they claim was taken from their ancestors generations ago.
They were shot with such weapons at close range, in at least one case aiming at the eyes. Pellets are typically non-lethal but can certainly cause much damage and this is the first time ever I read of police forces using them against civilians. 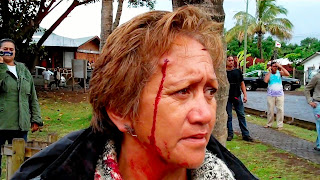 Whatever the case: Chile: hands off the Aboriginal Nations!

Sources: BBC, Save Rapa Nui (photos from this last site).
Posted by Maju at 6:34 PM