A report by Columbia University's Initiative for Policy Dialogue attempts to review the many many protests that have happened in these last years. The period covered is 2006-2013, which roughly approximates the Great Civilizational Crisis in which were immersed for the time being, which began in the economic aspect with the financial crisis of 2007.

The review has some points of interest, for example that while most protests took place in the High Income Region of the world, the largest ones by far happened in less developed countries: India with almost 100 million involved in massive protests against tolerance with rapists and Egypt with about 13 million walking out in the ousting of Mursi. The next places belong to Portugal (three multi-million marches in 2010 and 2013) and France (two multi-million protests in the general strike of 2009-10), followed by the 2013 massive uprising in Turkey, which is still ongoing intermittently. Then come Italy and Chile and the Arab Spring of 2011.

Most of the large protests took place in 2013, what underlines that the social, economic and political crisis is actually far from being settled and rather escalating beyond any possible control.

A major change involving the ongoing global protest wave is that most of those involved would have never before considered themselves activists of any sort but just common people and even "middle classes", whatever that means.

Again, while in the High Income Region, protests were mostly peaceful, riots were concentrated in less well off countries, largely in Tropical and Southern Africa.

The most notorious demand was real democracy, what outlines how even in states usually considered "democratic" there is a most serious breach of representativeness that seriously endangers social cohesiveness, as elected governments do not serve the people at all anymore but just the oligarchies.

However even if "real democracy" is the most chanted slogan worldwide, political demands overall are second to economic demands in the actual list of the globally outraged masses. 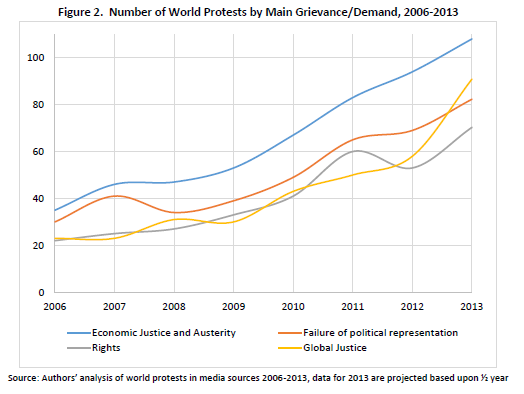 Most of these demands are surely mutually supportive and one could well write down a serious, simple and homogeneous platform based on them: grassroots eco-socialism in short.

Most protests (63%), of course, did not achieve anything, not even conciliatory measures. This again highlights the lack of real democracy because if a government doesn't pay any attention to millions demonstrating, then there is something very wrong going on and is systemic.

When protests achieved some of their goals, these were often disappointingly feeble: Arab regime changes or reforms that bring more of the same with just a new face, Chilean government accepts to negotiate with students but then they reach no agreement, etc.

The authors compare this period to such critical historical years as 1848 or 1968. However I suspect it rather compares with the late 18th century when the old feudal regime was collapsing everywhere, leading to American and European bourgeois revolutions, which today can't but be working class revolutions, as it is the transitional bourgeois regime which is collapsing.
Posted by Maju at 10:40 AM