A passenger of the missing Malaysian Airlines flight 370 has sent a completely black photo with a message and location data which is right by the Diego García airport.

The passenger, Philip Wood, from the USA and working for IBM in Malaysia, sent a completely black photo with a short message and the Exif metadata, which reports the exact time and geographic coordinates (via GPS).

The coordinates are within two miles (3 km) of those of Diego García, as mapped by Google. Diego García is a key US military base already highly suspect of being the destination of the missing airplane.

I have been held hostage by unknown military personal after my flight was hijacked (blindfolded). I work for IBM and I have managed to hide my cellphone in my ass during the hijack. I have been separated from the rest of the passengers and I am in a cell. My name is Philip Wood. I think I have been drugged as well and cannot think clearly.

Intriguingly the IBM website does not list him at all, however his tragedy had been previously reported by the Los Angeles Times, mentioning him as working for IBM. Also the following image from his Linkedin profile reports him as IBM executive: 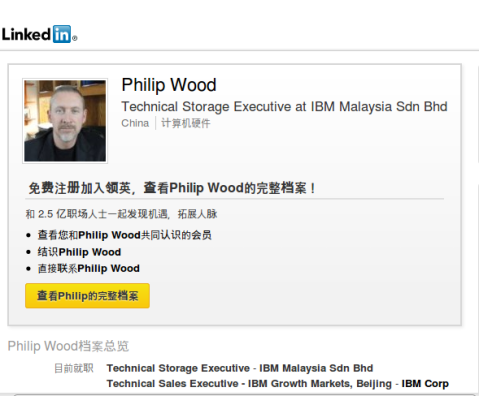 Most of the passengers in the kidnapped airplane were Chinese though.

The exact reason why the airplane was kidnapped and the destiny of the other passengers remains a mystery to this day. But what seems growingly clear is that the flight was diverted to Diego García and that therefore the US Military is behind it.

Sources: Webguerrillero[es], Before It's News, Jim Stone Freelance (original source with plenty of details and a reasonable discussion on the credibility of the message and data).
Posted by Maju at 11:58 PM