The missing flight 370 was apparently escorted by military jets as it flied back through Malaysia into the Indian Ocean. That is at least what a relative of some of the missing passengers claims based on witness accounts.

There is growing conviction among the relatives and friends of the passengers that this was a military operation of some sort because, on one side evidence accumulates in favor of such theory and on the other the continuous denial or question-avoidance by the authorities strongly points in favor of a cover up.

Watch the former girlfriend of US passenger Philip Wood explaining to CNN how the relatives feel on all this:


From all the evidence that has accumulated, I am positive that the airplane was hijacked by US paramilitary groups, most likely with the help of the pilot and the Malaysian authorities, and diverted to Diego García, a US-UK military base south of India.

A previously posted map on the most likely route taken by the aircraft: 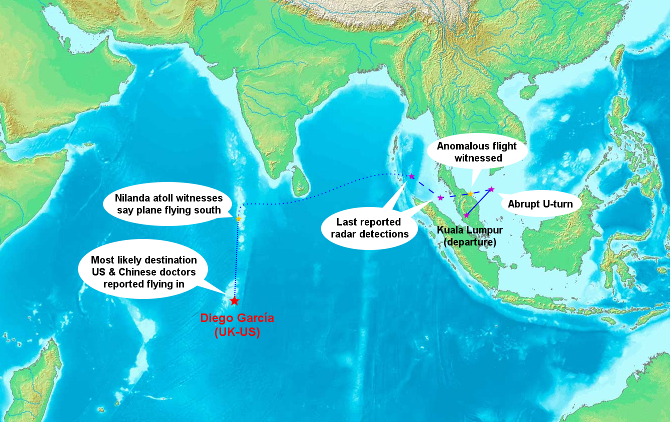 Update: It is also interesting this piece by Tony Gosling.


Not much new information as such but a reminder of some of the available evidence: Rolls Royce early info on the engines being active for five more hours than the originally supposed crash and their later recant (no doubt under official pressure), the Maldivian witness accounts of the plane heading southwards at low altitude, etc. Also some previous scary conspiracies which might be related: like the knowledge that modern hyper-electronic airplanes can be hacked (just like cars can) and put under remote control and the dark reminder of the most likely murder, also by remote control, of investigative journalist Michael Hastings, who apparently was about to report on CIA director Joe Brennan's strategy of using military secret services against domestic journalists.
Posted by Maju at 9:03 PM