Ecuador: fight for the right to abortion

While President Correa shames himself and all the Left claiming that he will step down if abortion is legalized in Ecuador, a dozen women protested in Parliament FEMEN-style for its legalization. 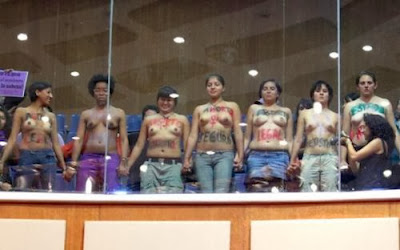 The President of the Ecuadorean Parliament, Roxana Alvarado, impeded that police evicted them saying: "gentlemen of the public force, we have not requested your intervention".

She added: this is a public space and demonstration is allowed, I request that the public force retreats and let them demonstrate in freedom.

In Ecuador abortion is only allowed for women with severe mental problems, less than 1% of the population.

Meanwhile the Ecuadorean President Rafael Correa has strongly tied himself to the reactionary fundamentalist Christian dogma by advancing that he won't sign such legislation and even blackmailing his own coalition Alianza País with his resignation if the law is passed.

Correa accused the MPs of his own party who support freedom of abortion of "disloyalty" and by the moment he has achieved that Paola Pabón retired her proposal to legalize abortion.