The last edition of the Euskobarometro is here and it shows that Western Basques still want greater self-rule, often identified with independence and that they massively support the right of self-determination here and in Catalonia.

Follow selected graphs annotated by me (red and green text in English) for better global comprehension. Color-coded boxes indicate relevant figures of declared vote for each category (click to expand to original size): 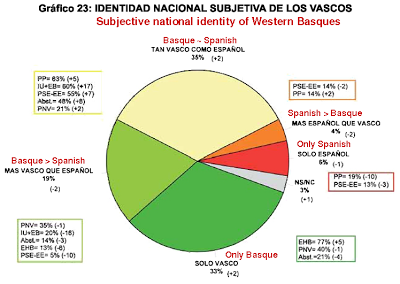 Nearly all Western Basques feel Basque, what varies, excepted a bunch of "Martians", is whether we feel "Basque and Spanish" (i.e. Basque as a subcategory of Spanish: 35%) or Basque only (i.e. Basque as a category on its own right: 33%) or, the intermediate position (Basque primarily and Spanish secondarily: 19%).

As we shall see through the graphs, the two latter stands are a continuous zone of Basque identity while the former is a mostly distinct zone of Spanish identity with concession to the sociological reality they actually live in. Very roughly always but there is a continuous c. 5-to-3 apportion that also shows up in elections and what-not. 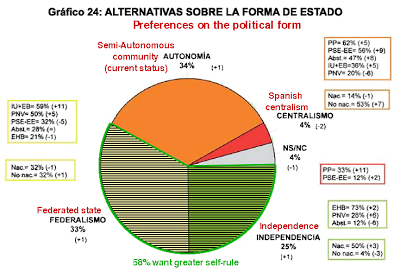 
The right to self-determination of nations 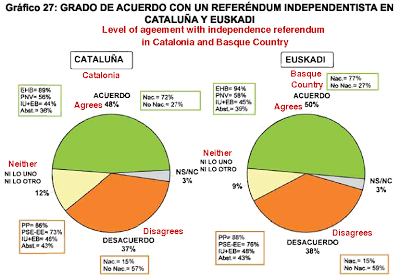 Guess what? Roughly 5-3 again, although there is some distortion with the ambiguous option "neither". A slim majority wants a referendum here in the Basque Country and also in Catalonia, the 35% Unionist community is against the right of the peoples to choose their own destiny. 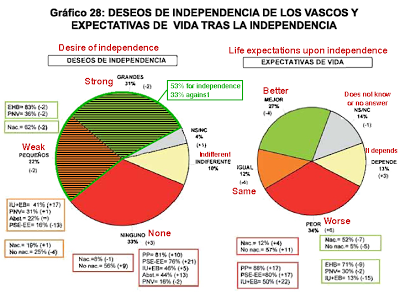 True that some of those wanting independence may be contented with a much greater self-rule ("federalism") but that option is clearly not on the table and won't be, as the Spanish autocrats have recently set clear for the Catalan case, with even sabre rattling by big-mouthed retired military officers who scare nobody anymore.

While the Euskobarometro barely deals with geography or ancestry for each type of replies, it would be interesting even if just for the record, to know which municipalities or what ethnic ancestry do each sector has. I have some idea but it'd be interesting to see it confirmed.