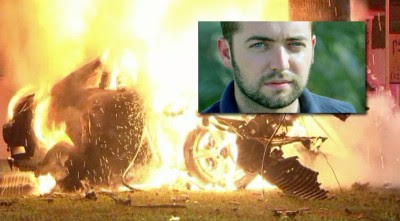 Michael Hastings, a Rolling Stone investigative journalist, was killed in a car "accident" on June 17th in Los Angeles, California.

Hastings, 33, had reported on Iraq and Afghanistan invasions but also on the dirty war and psy-ops by US military and spy agencies, including the global political persecution against Julian Assange. His most notorious report however was the uncensored interview with General Stanley McChrystal, which sent him out of the command chain.

He was at the moment of his death investigating CIA Director John Brennan, who was central in the witch-hunt against journalists by the US secret services, according to a Stratfor email published by Wikileaks.

Precisely the day before his "accident" Hastings was paid visit at home by FBI agents. He also sent mail to several friends saying that he was onto "a big story" and needed "to go off the radar for a bit". He also mentioned that the feds were interviewing all his "close friends and associates".

Hours later his car crashed against a palm tree at high speed, exploding in flames in a way practically impossible for a car outside Hollywood studios. 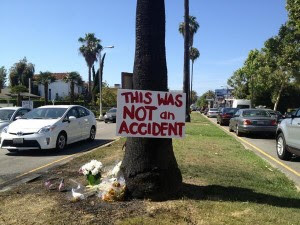 Actually the car was first traveling at a mere 35 mph (~50 Km/h), according to scientific estimates based on video evidence, however a gas station witness mentioned that the car was speeding up to maybe 100 mph (~170 Km/h) or more.

The angle at which the car hit the palm tree evidences that the car also turned just before the crash. Strangely the tree was unharmed.

Video taken just after the "accident":

Also very intriguing is the way the car burned. Normally cars don't explode nor burn at all (only in action movies but those are Holywood tricks, not reality) and, if they do, they need some time to ignite and do not burn as dramatically as Hastings' car. Therefore an the presence of an explosive device is suspected.

“I’ve never seen an explosion like that,” said Terry Hopkins, 46, a former U.S. Navy military policeman who served in Afghanistan, told me. “I’ve seen military vehicles explode, but never quite like that. Look, here’s a reporter who brought down a general. He’s sending out emails saying he’s being watched. It’s four in the morning and his car explodes? Come on, you have to be naïve not to at least consider it wasn’t an accident.”

This is the tentative reconstruction by San Diego 6 News:

The release of a new surveillance video from a nearby Italian restaurant by Michael Krikorian, an author, freelance blogger who also writes for LA Weekly, reveals a lot of information about Hastings’ final seconds.

A University professor told San Diego 6 News that calculating the speed of Hastings car follows a simple mathematic equation. By using the video and the distance traveled (195 feet) as well as the seconds that lapsed prior to the explosion – the car was traveling roughly 35 mph.

That revelation is important because Jose, an employee of ALSCO a nearby business, and a witness to the accident told KTLA/Loud Labs (Scott Lane) the car was traveling at a high rate of speed and he saw sparks coming from the car and saw it explode BEFORE hitting the tree.

The pre-explosion could possibly explain the flash of light on the video that preceded the appearance of the car in the video. The pre-explosion and slower speed could also explain the minimal damage to the palm tree and the facts the rear tires rested against the curb. It also provides an explanation for the location of the engine and drive train at more than 100 feet from the tree impact area.

However other experts disagree (again from Global Research):

I showed the video to Scott E. Anderson, an Academy Award-winning visual effects supervisor with Digital Sandbox who has engineered explosions for many films.

He viewed the footage more than 20 times at various speeds, including frame by frame. Anderson concluded, “This was not a bomb.”

He continued, “It comes down to physics. A bomb would have lifted the car and the engine up. Based on this video, the car doesn’t go up, and the engine goes forward, which makes sense since the car apparently did not hit the tree head on.”

He said the fireball may be enhanced by the recording device.

“That type of surveillance camera has auto exposure so it can change what it sees based by the ambient exposure day or night,” Anderson explained. “This camera is set at night and anything that happens very quickly, be it a flash light or a big ball of fire, the camera won’t react fast enough, so the first flash of light is going to appear much bigger in the viewing. So the initial explosion would always look bigger than it is.”

He suggested a simple demonstration using a cellphone video app: Strike a match in a dark room and it will flare up on camera much more than in reality.

Another, maybe complementary, hypothesis is that the car was hacked. Modern cars are full of electronic devices that control every single function and, of course they can be hacked. This video shows it:


I really hate this kind of cars, sincerely, because a simple electronic malfunction can cause an accident or the inability to solve a real life problem, such as getting out of the car after falling into water. But nowadays most are like that.

But what I had never imagined before in my naivety was that they could be so dramatically hacked to the point you don't have control at all anymore. No "manual control" function exists: either the ECUs obey you or not, and, if not, they may well be obeying someone else.


So your call: was Hasting murdered or does the "accident" version (sustained by LAPD) ring true in your mind instead? And, if murdered, was it the FBI, the CIA, Gral. Stanley's personal revenge or a bit of it all?
Posted by Maju at 11:29 PM