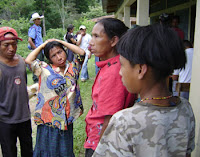 Three persons of the Tolupa nation were murdered by hitmen at the service of illegal miners, foresters and constructors on August 25th at Locomapa (Yoro).

Already in June the Tolupas denounced forester industrial Kenton Landa Úcles for the introduction of heavy machinery in the Tolupa forest.

In a similar incident, considering the total subservience of the state institutions to capitalist expoliation, soldiers murdered the member of the Lenca nation Tomas García on July 15th.