Bin Laden dead? Is there a May Fools' Day?

Credibility to US announcement of Bin Laden's death is already shattering the Internet.
The image to the left has been circulating as that of Bin Laden's corpse but, after due comparison with that of the right it is obvious that we are before a photo-montage: 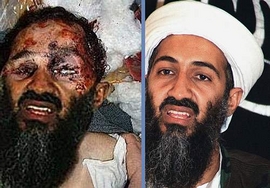 According to the source (Gara), AFP has already confirmed that we are before such a fake photo, one that was already circulating even before yesterday's announcement. The Guardian also confirms it is fake.
Buried at sea
More nonsense: according to the New York Times, quoting American officials (sic), Bin Laden was "buried at sea".
Uh?
Why would they bury that most wanted corpse everyone would love to see, wouldn't it be better to have it frozen?
Why would it be buried (sic) at sea of all places? When it was supposedly killed far inland, near Kashmir?
It is such an obvious distraction maneuver that one wonders why are they even making the claim at all. Who are they wanting to fool? The US and World public? With such a poor story they won't fool us for long. Why all this nonsense?
May Fools Day?
It would seem that someone has not enough with April's Fools Day and wants to extend the prankster usage to further days along the year: April 1st, May 2nd and so on? I can barely find another explanation.
How can anybody, and that goes for you Mr. Obama (and all ministers, tsars and generals), pretend to rule an Empire such as the USA based on pranks and lies? Do you like to be taken as a fool and a liar like your predecessor Mr. Bush?

What the heck? What's the purpose of all this nonsense?


Update: why does the media not question the White House version even if no evidence whatsoever is provided and everything stinks to lies and more lies? What kind of lackey journalism is this?
Posted by Maju at 3:06 PM