Echoes from the Class War (Dec 4)

Besides what I have already commented along the week (things like Chernobyl hero murdered by state in Ukraine protest, the scandal of declaring fascist terrorist Breivik 'insane', the coordinated eviction of protest camps in LA and Philadelphia, the massive public workers strike in Britain or the political persecution of Anarchists in Canada) a lot of other things have happened that called my attention. I could only collect the links to release them together in the weekly review.

Arguably, what has been more striking this week is the widespread acknowledgement of the fact of Fukushima Daiichi being in China syndrome phase (or almost so for the more optimistic ones) as something way too real to ignore and way too powerful to deal with. It began on Wednesday and was very explicit by the next day or so, only to decay as the weekend set in:

Newly-surfaced Video: “For some time” NRC staff has contemplated that all reactor cores are ‘ex-vessel’ due to time without cooling « ENENEWS.COM

NHK: “This is a very severe accident” — Nuclear fuel at Reactor No. 1 may have melted through 65 cm of concrete… Only 37 cm at thinnest point (PHOTOS) « ENENEWS.COM

Institute of Applied Energy: Corium Could Be 2 Meters Deep into Concrete | EX-SKF

AP reveals doubts by nuclear experts: “The fuel is no longer there” — Measuring temps of empty cores “meaningless” — “Nobody knows where and how hot the melted fuel really is” « ENENEWS.COM

#Fukushima I Nuke Plant Reactor 1: TEPCO and NHK's Obfuscation on Corium in the Concrete | EX-SKF

NYT experts: “Danger of a wider radiation leak” — Cooling system may not work for fuel melted into concrete — Tepco “not worried” « Enenews.com

Other news on the Japan nuclear catastrophe:

Temperature has gone “over scale” at reactor 2 | Fukushima Diary

#Fukushima I Nuke Plant: Head of the Plant Yoshida Is Hospitalized, Will Resign as of December 1st | EX-SKF

#Fukushima I Nuke Plant: Yoshida's Last Day on the Plant Was November 14 | EX-SKF

Breaking News ; Incinerated ash of over 100,000 Bq/kg is allowed to be landfilled | Fukushima Diary

Bilbao:  2012 city budget halves the money for neighborhoods and increases in €12 million the expenditure in private contractors (typically prone to corruption and cronyism)[es] <<Branka. 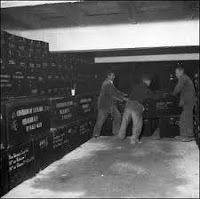 Demo today Sunday 4 in Garinoain (Navarre) against the usurpation of the town hall by a fascist list of outsiders with a bare 5% of the vote[es] <<Sare Antifaxista.
Demand that the Basques buried in the Valle de los Caídos (pharaonic fascist monument where thousands of antifascists were buried on the pretense that they were fascist 'fallen') be returned to the Basque soil[es] <<Sare Antifaxista.