Some videos from Libya

At this moment maybe just better let the Libyans speak by themselves:

Locator map of districts under rebel control (red) and where struggles has happened in the last hours (orange), following Al Jazeera live blog: 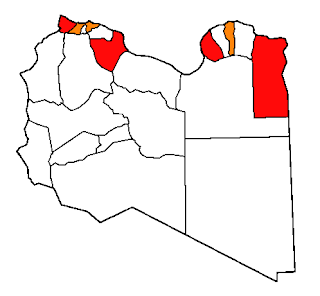 The situation in the white areas is unknown at the moment.

Qaddafi has accused the rebels of not having any ideas of their own and being manipulated by Bin Laden (uh?).

According to TeleSur, which managed to get a journalist to Tripoli not without difficulty, the situation in the capital was calm this last evening, except for a pro-Qaddafi demonstration and they also reported of institutional negotiations with the Eastern tribes for a settlement. Also a strong military and police presence was reported for Tripoli.

Al Jazeera on the other hand reported of massacres in Az Zawiya (half way between Tripoli and the Tunisian border). According to the Qatari news site, an "envoy" from Qaddafi ordered people to abandon a mosque they had sheltered in or suffer a massacre. This video showing many injured youths while gunfire is heard in the background is allegedly from Az Zawiya: