Those lazy Germans! (The truth behind the myths)

As you may know, along with a handful of real facts (high debt, tax evasion) there are a bunch of topical myths being launched from the German and English language media against the victim of the latest IMF bullying campaign: Greece.
One of them is that Greeks are lazy and work too little. Fact is that Greeks are the Stakhanovists of Europe and the Western World, working 20% more than the OECD average and beating all records within this organization: 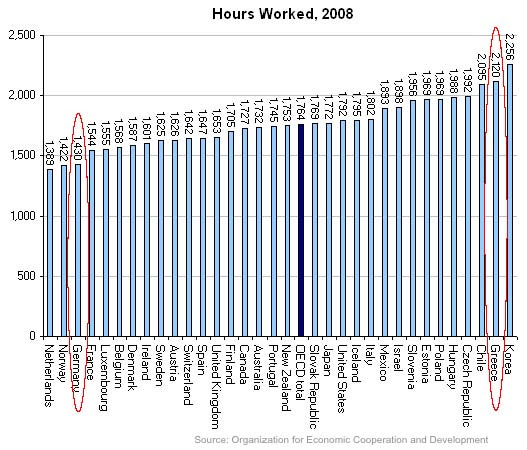 A map version of the above graphic (I love drawing maps, you know): 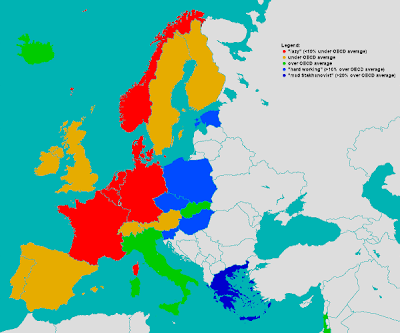 Red is lazy, blue is hardworking to Stakhanovist (Greece only, South Korea is as well but it's off map). Only the Norwegians (who can afford to live above their means thanks to the oil) and the Dutch work less than Germans in all the OECD.
Hmmm, maybe do they "work" so many hours but are all the time dozing at their workplaces?
Not at all: Greek productivity per worked hour beats Germany, France the USA and is 20% higher than that of Britons:

Contrary to common racist misconceptions, Germanic peoples are not more hardworking but actually less, it seems.
This is surely not any inborn trait but a privilege earned through centuries of media manipulations and military bullying: Germanic workers are able to be less productive because their states and national bourgeois classes are on top of the predatory chain, I mean: the Capitalist economy.
Greece instead have not been in that top predator position since Alexander or maybe the Byzantines. And that was long ago.
In fact this neocolonial situation has some flavor to the Fourth Crusade, when Germanic knights and Venetian traders plundered the Byzantine Empire, which would never ever recover. Let God save me of my friends, that I will take care of my foes personally.
More lies: Greeks retire early. They do not for EU averages:
All this clarifying data comes from an excellent article by Alex Andreou at Sturdyblog: Democracy vs Mythology: the Battle of Syntagma Square. There is much more in it, so I strongly recommend you to read it in full.
Posted by Maju at 4:00 PM