Yesterday there was another popular assembly in Puerta del Sol surrounded by aggressive riot police forces. Eventually they decided to call another assembly for today at 18:00. Some of the members joined the occupation of university grounds by students on strike.

The student strike at the Universidad Autónoma was violently repressed by police forces, who entered at request of the rector, just as happened under Fascism.

At least 50 people have been arrested.

Occupation of the faculties have been called for tonight in solidarity with the victims of police repression.  Tomorrow a festive march ("pasacampus") has been called as well.


1. Police attacked first in order to divert media attention to clashes they provoked

How to make a 2+ million demo into a public order issue where you can criminalize the masses? The reactionary Spanish government decided to send the dogs in just before the news hour. There were no provocations other than some people trying to set camp, although there was indeed self-defense with whatever was at hand.

By controlling all the mass media via their bourgeois mafia, the government has managed to turn the tables on: they don't almost mention the millions marching and all the support necessary (half the country?) but the "violence". They don't invite march leaders to the media but police agents and reactionary journalists trained to bark in favor of their master. Not a single network escapes this trap, what implies that there is no media democracy in Spain de facto and you need to resort to Internet in order to grasp some of the truth.


2. They are using "Venezuelan" defamation tactics

Just as it became notorious in the Venezuelan fascist "revolt of the posh", where images of repression from around the world were relabeled as if they were happening in Venezuela (Basque victim of Spanish torture became "Venezuelan", Tahrir repression by Mubarak's police became "Venezuelan", etc.), the Spanish authorities are resorting to falsification of information in order to defame and criminalize the masses.

To the right one such example: a cold case of a weapon hidden in a crutch has now been presented by police as "evidence" of the "hidden weapons" that demonstrators on March  22 carried in their fantasy alt world.

The case of the latest political prisoner is a clear one of frame-up: Miguel has been sent to prison for allegedly taking part in the incidents of Atocha but he was actually arrested 2 km away in Recoletos, where he was probably among those trying to set up camp.

There is no evidence beyond police declarations. In the Spanish inquisitorial "justice" system, these may be enough (depending on the credibility the judge gives them) but it is well known that police lies almost systematically and the previous example is one of those.


Those arrested were treated worse than animals and subject to practices that can only be considered torture. They were kept for eight hours standing against a wall with their arms up, deprived of water and not allowed to use the toilet, deprived of food for 24 hours, menstruating women were not allowed to change their tampons in the almost two days of their arrest.

The last info on the arrested students is that they are 53. The Vice-Rector had the whole building locked and with many activist students locked inside. They could eventually open a door but police had already arrived (on the Rector's request) and rounded up some 25 inside and the rest while they attempted to find refuge elsewhere in the campus.

Much of the focus of the Madrid protests has therefore been derived to the Universidad Autónoma, where road blockades and occupations continue, now also demanding the resignation of the Rector. 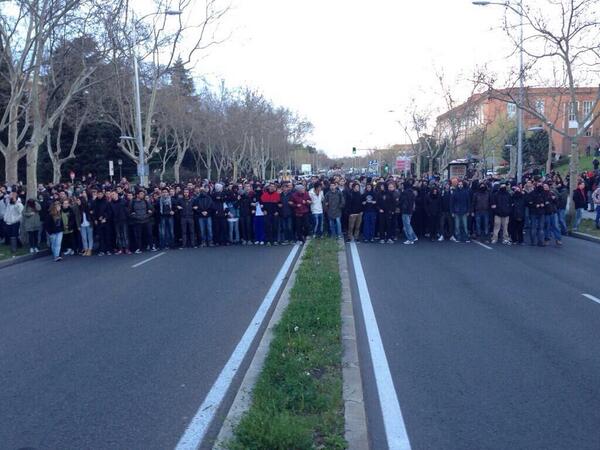 The daily assembly at Sol continues but they have by the moment desisted from setting up camp and are also focusing on the students' struggle.