The Marches for Dignity, which began weeks ago all around the state of Spain, after a call from the Andalusian Left, seconded by many other groups (unions, parties, social movements), have resulted in some 2.5 million people taking the capital of the realm this Saturday. That is about half the population of the city and about 7% of the total population walking out of their homes and marching into the capital.

Obviously all who are there are, but not all who are are there. So the actual figure of sympathizers can well be five or ten times greater. In other words: almost all Spain is very angry and demand immediate change.

What did the protesters demand? Simple:
The full manifesto can be read in English HERE.

In any democratic country such a massive protest should cause the immediate fall of the government and snap elections. But democracy is more and more just a farce and Spain is not different in that but actually avant-guard in this devaluation and falsification of Democracy.

Since 20:15 police began charging against the marchers near the conservative headquarters of Génova Street and those who attempted to set camp at various locations. They did not even allow for the final act to proceed. According to reports, those present faced them and set up barricades. They even forced the armed police forces to pull back several times just fighting back with whatever they had at had, such as pebbles from the fountain. 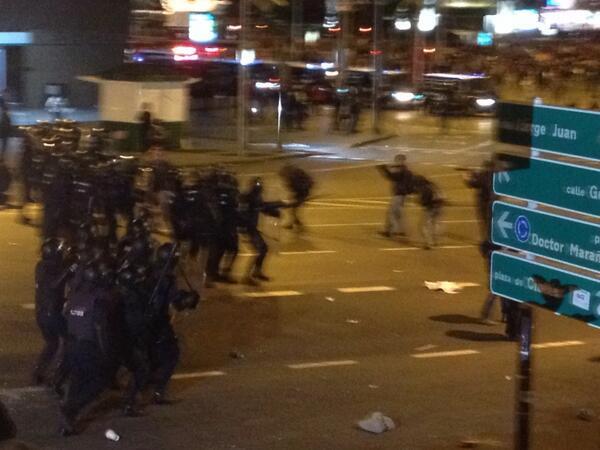 The bourgeois media have reported 50 agents injured, what is rejected with outraged disbelief by the people who were there. What seems more certain is that from the popular side, some 29 citizens have been arrested and 33 injured by police weaponry, which they shot directly against the protesters, in clear breach of all legality.

Clashes lasted until at least midnight, when protesters gradually pulled back.


Update (Mar 23): some protests and meetings continue on Sunday

Hundreds met this morning at the Reina Sofía Theater in a popular assembly to decide what to do next. Some proposals included calling for a general strike but in the end a new protest was called in Puerta del Sol this evening (19:00), mostly to demand the immediate release of those arrested yesterday, and tomorrow at 10:00 in Plaza Castilla.

They also called for rallies in all the government delegations across the territory of the state (19:00 also).

The assembly was determined to proclaim the right to self-defense: "yesterday we exerted sefl-defense and we must say that proudly", what is a development in itself.

The meeting was heavily watched by police forces, which tried to provoke the assistants to no avail.

It was known that police had used tear gas CS (ATL-1) in the evening attacks, something that has no precedents in the Spanish capital (although it has been used in the periphery).