Scotland votes today on its future 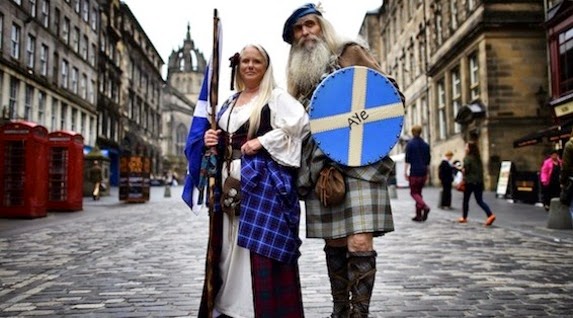 Will the majority of Scots vote for an independent Scotland or prefer to stay under English rule? Whichever their choice, what is most important is that they do get to choose, something that most people-nations in Europe or elsewhere are not allowed to.

This makes the Scottish referendum a central reference in the ongoing process of internal European decolonization, which is one of the most painful democracy issues in the subcontinent awaiting resolution.

All other oppressed people-nations of Europe look at Scotland today with great interest and to London also with some admiration for being able to allow the fundamental democratic right to secession. Meanwhile the petty tyrants of Madrid, Paris and other neo-Absolutist (Jacobin) regimes shiver and grunt, fearing not just contagion (most of the separatist movements in their residual empires are older and stronger than the Scottish one) but particularly the difficulty of justifying repression against attempts of democratic empowering when such a precedent has been set.

Would I live in Scotland (where I'd be entitled to vote as resident EU citizen, per the rules of this referendum), I would definitely vote YES. No nation has ever repented from regaining sovereignty, even if some times the road to freedom may be difficult. Ask the Estonians if they would want to be again under Russian domination, ask the Angolans if they would like to be Portuguese again, ask the Irish if they would rather be British, ask the Icelanders if they'd prefer to be Danes, ask the Kosovars if they'd wish to be under Serbia or ask the Greeks if they'd want to be under the Turkish yoke? Nobody ever repented from getting their natural rights. And that will also be the case with Scotland if the YES option succeeds today.

Of course it is the decision of Scots and we must all respect it, whichever it is, but we must also all be glad that they get the right to choose, something that is a fundamental human right, seldom respected.

Hopefully soon Basques, Catalans, Corsicans, Bretons, Kurds, Chechens, Sahrawis and other oppressed peoples of this part of the World will follow suit. It is time of decolonization.
Posted by Maju at 6:08 AM