Just found the news and the incredible but very real photos at Naked Capitalism. Let's face it: technocratic means Fascist by another name and in this case they have appointed a true Nazi without any possibility of redemption.
The new Minister of Infrastructure of Greece is Makis Voridis, member of the far-right party LAOS. Earlier he was leader of the Hellenic Front, a party affiliated with Le Pen and other European Nazis, and even earlier he was chasing lefty students with axes and hammers through the campuses of Greece (nevermind: he never finished any career). This is an old picture of the new minister: 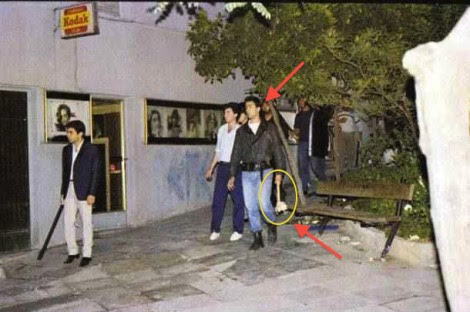 And a new picture of the brownshirt (right, the one at the left is his mentor of G. Karatzaferis, leader of LAOS): 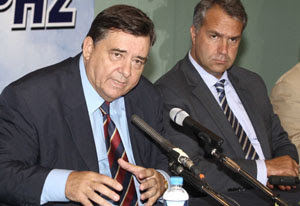 He's so blatantly Nazi that he even denies the existence of the Holocaust as "a myth" and has no contempt in speaking out with an anti-Jewish discourse.
Enough for even angering another of my bête noires: the ultra-Zionist Anti Defamation League. Sadly for them, they have cried so much "antisemitism!" when it was not such thing that now they are like the boy who cried wolf.
But this time I'm going to agree with them: this guy is too much and there seems to be no reason at all to have him in the new coalition government of L. Papademos. The technocrats are a backdoor for the Nazis, Hitler's men were also first ministers in technocratic (ample spectrum right wing) governments in Germany some 80 years ago before taking over in full force.
Beware because we are going quickly down the road of fascism.
Posted by Maju at 2:16 AM