I despise Christmas with its stinky mixture of Patriarchal pseudo-religious word-idolatric ritualistic dogma and Capitalist commercial consumerist brainwashing in the prostituted name of peace, love and whatnot.

Truly I feel much like this FEMEN activist who had the gills to interrupt the pitiful decadent Christian ritual with such an obvious Pantheistic slogan:

But what really motivated me to write this Xmas entry was this excellent postcard by graffiti artist Banksy, which says it all: 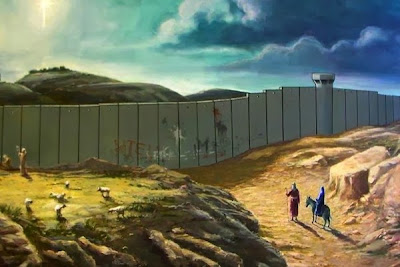 Somehow related in the Xmas knot is this other American Gestapo story which also illustrates how undercover fascist is the Imperial regime we live under. The FBI investigated the classical Christmas film "It's a Wonderful Life!", full of "honest capitalism" propaganda and religious magic because it depicts a powerful banker for what they are: greedy and evil.

The screenwriters Francis Goodrich and Albert Hackett were accused in the report of being crypto-Communists. As evidence of such tendency, having lunch with other screenwriters claimed to be Communists was apparently enough. Also some details of the plot (the suicide attempt scene) have vague parallels in a Soviet movie.

So that's what your taxes and tributes to the Empire are wasted in: protecting Scrooge from being shown as he really is.

Sources: Webguerrillero[es] (link 1, link 2) and The Daily Mail for the American Gestapo story.
Posted by Maju at 6:41 PM