Two Japanese citizens have been sent to hospital upon arrival to Chine because of dangerous levels of radiation, seriously exceeding limits. This seems to highlight how the actual looming danger of radiation is already reaching well beyond where the authorities would admit to.
The two travelers live in the prefectures of Nagano and Saitama, west of Tokyo, which is even closer to the destroyed nuclear plant. The travelers had gone through Tokyo airport but they felt they had not been exposed to radiation... until the Chinese told them better.
If these two people are indicators of where actual radiation has become pervasive enough to seriously exceed limits, what is very possible, then most of Northern Honsu, including the Tokyo-Yokohama metropolitan area, is a danger zone and should be evacuated (but can you actually evacuate so many people? what about all the business and government infrastructure that sits in Tokyo?)
I made the following map with my estimate of what area is clearly dangerous right now in Japan, according to the data provided by this Chinese detection: 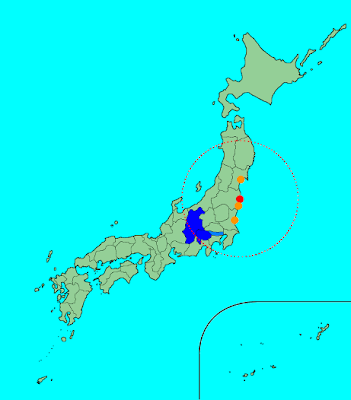 Legend:
That is about half of Japan! We may be talking of 50 million people (a rough but surely not too wrong estimate).
And the situation can only get worse, unless the plant is effectively secured somehow (surely some sort of Chernobyl-like "solution"), what does not look like happening any time soon.
Source: The London Evening Standard (via Energy News).
Radiation levels at sea near Fukushima I more than a thousand times the legal limit.
BBC reports that radioactive iodine levels at sea near Fukushima (no distance specified) are 1250 times the legal limit.
There are concerns that radiation may be seeping into groundwater. This I already mentioned before can be a major problem in order to adopt a "Chernobly solution" because the plant is barely above sea level, what makes almost impossible to seal it under ground level.